There is a certain charm about small towns and small town festivals. If they are an agricultural community, the celebration will often center on the predominant crop. Pitt Meadows, British Columbia, where I used to live, has its annual Blueberry Festival. Others may celebrate their heritage with Pioneer Days. Many tie their festivities in with the national holiday – Canada Day or the Fourth of July in the United States. A parade is almost always part of these events.

As you drive in to the small village of Wabamun, Alberta (population 682) you encounter a giant dragonfly – a ten metre long sculpture atop a six metre pole. Made of scraps, including parts of an old airplane, it is the largest dragonfly in Canada.

The town sits on the edge of Wabamun Lake, a popular destination for Edmontonians and others  in the summer. Every year towards the end of June the town celebrates the Dragonfly Festival. This three day event brings in as many as 10,000 visitors. This year it ran from June 23-25.

Janis and I were visiting her brother and family in Drayton Valley for a couple of days and we drove out to take in the second day’s events. 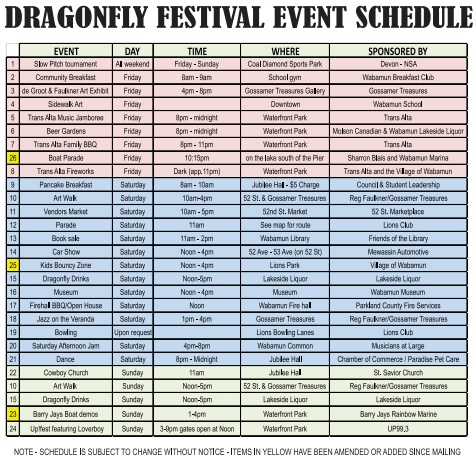 We arrived about forty-five minutes before the start of the parade and so we took in a bit of the Art Walk before and after.  Like many small-town parades, this one started off with a marching band, a group of Air Cadets.

This was followed by politicians in cars waving at the crowd and tossing candy to the children. Getting the kiddies ready for when they’re grown up and start clamoring in earnest for free goodies.  There weren’t just politicians. One was a wannabe – a candidate for the nomination to represent the Conservative Party in the next election.

This was followed by another staple of parades everywhere – vintage cars! There were quite a few of them and there were even more on display after the parade. There were some modern cars as well – souped up truck and some expensive roadsters, including a green Lamborghini.

Local businesses were there, some with simple makeshift floats. I rather liked Home Hardware’s giant hammer.

But floats were few and far between. The best effort was Al’s Affordabago – a converted 1934 Chevy Truck. Your rustic camper on wheels. It was also towing a small trailer.

One got the impression Al was a no-nonsense sort of guy. The front of the truck had a massive chainsaw blade overhanging the engine. There was also a noose hanging from a wash line pole with a sign that read “Some people just need a hug… around the neck… with a rope!”

The truck was festooned with bric-a-brac including a number of antlers, the skull of a steer, a beer keg, an old water pump and a slew of old license plates. I wonder if Al actually goes camping in that contraption!

As parades go, it wasn’t the greatest, but everyone loved it. And almost everyone was tossing out treats for the kids.

The Art Walk and Vendor’s Market were quite well done. Many Albertan artists had booths displaying their art – mostly paintings but also sculpture. There were 38 artists on display this year, the fourth Dragonfly Festival to feature the walk.  I was quite enchanted by the work of Josh Harnack who painted people with animal heads. Mounties were a favorite subject.

Another artist, Kevin Wilson,  does air-brushed art over metal and featured a Canadian flag with late Tragically Hip singer Gord Downie in place of the maple leaf.

Not surprisingly, since this is Alberta, Wilson also had colorful ammunition boxes on display.

The local interest in art stems from the sponsorship of a local art gallery, the Gossamer Treasures Gallery. We went in and it featured a couple of Alberta artists  work for the festival. The theme was indigenous people and artists Reg Faulkner and Henri de Groot both capture native culture well.

But I was particularly taken by a book and art work on the lives of emergency first responders by artist Daniel Sundahl who signs his work as DanSun. The artist is himself a paramedic and firefighter in the City of Leduc, Alberta. These were very evocative and emotional works capturing both the dedication and the agony of doing such work.

Wandering around the Vendors Market, we came across Signature Silk  where you could silk-screen your own silk scarf. My wife decided to have a go and her sister-in-law sponsored her granddaughter’s effort.

Colours are added to a bath of special solution. The colours can then be swirled with a rod to create patterns. More drops of colour can be added. When the artiste is satisfied, the silk is dropped over the solution where the colours then adhere. It is removed and voila – a silkscreened scarf.

After that we went to check out the vintage car display when it started to rain. We escaped under the tent of The  Green Lambo Guy who is actually a professional motivator and personal life coach. His Lambo is a symbol of what a determined person can achieve.

After the rain let up we called it a day. My wife and I were on the road again the next day, but the closing day of the festival featured an all day (3:00 PM to 9:00 PM) event called Up!Fest at the waterfront park. This was largely a music festival featuring local artists and culminating with a show by iconic Canadian rock band Loverboy (The Kid is Hot Tonite, Working for the Weekend).

Check out the Photo Gallery for more!