Niagara Falls! The name alone stirs up images of thundering water rolling over a vast cliff and plunging 160 feet to the gorge below. The falls were formed during the Wisconsin Glaciation, the last North American ice age which happened from 75,000 to 11,000 years ago. The receding ice carved out the Great Lakes and the waters of the western four lakes carved a river through the Niagara Escarpment. Niagara Falls is the largest waterfall in North America by flow rate. The average annual flow over the Horseshoe Falls is 2,400 cubic meters a second. The peak flow is 6,400 cubic meters a second. Water flow is regulated by a weir upstream of the falls and is halved at night and during the winter months.

I first visited Niagara Falls as a young boy of three in 1952. I don’t remember anything of the visit but do have this photo of me with my Mom and Dad at the falls.

I didn’t see the falls again until 1996 when my family and I attended my brother’s wedding in Toronto. Finally I got to visit Niagara Falls once more on a recent trip to visit my brother and his family who now lived in Whitby. On April 28 my niece Kathryn and I spent the day visiting this scenic wonder.

We parked in the Clifton Hill area north north east of the falls which has become a kitschy tourist mecca catering to visitors with arcades, fun houses, rides, and restaurants.

After a bite to eat at Boston Pizza we hiked down the hill to the Niagara River gorge. There is a road that runs next to it along with a boardwalk and park. The first thing you see is the American Falls.

The talus at the base of the falls is the result of numerous rockfalls over the last 150 years as the turbulent waters eroded the edge. A large section collapsed into the gorge in 1931.

The north end once had a large rocky ledge known as Prospect Point, a popular viewing point for the falls. One day in 1954, a young boy named Dan Eisenstein noticed cracks in the popular lookout. He tells the story in his own words:

I was 9-1/2 years old and a bit inquisitive. I enjoyed the view, but after watching lots of water going over the falls for a bit, the novelty sort of wore off for me.

As I meandered along the Overlook, which apparently was just above the power plant, I noticed a fairly wide crack in the pavement, about 1-1/4 inches and followed it. It went quite a ways, from one end of the section to another and if I recall correctly, about 10 or so feet from the railing. This did not seem good. I pointed it out to my dad, who also became quite concerned and he notified a ranger, who took a look and also became concerned. Shortly thereafter, it was cordoned off with police barricades and guarded by some rangers.

The managers of the Movietone Newsreel company set up round the clock cameras as the area was made off limits to tourists. The very next day the point collapsed. Below is the actual newsreel footage of the collapse of Prospect Point, sending 185,000 tons of rock into the gorge. Remaining unstable sections were dynamited in three separate blasts in August that year.

Who knows how many people may have died that day but for the observations of a nine year old child! Eisenstein continues:

I have no idea how many days this crack was there, but it was weird to be the only one who noticed it the day before it collapsed.

I suppose had this happened today, there would have been pictures of the crack, and possibly interviews with the kid who spotted it and set things in motion and it would have gone viral. I do not know why it was not noticed by the people who worked there, but they acted immediately after they were notified. Before it collapsed, my family was quite proud of my observation, but after it collapsed, the timing did not go unnoticed, and I was a bit of a ‘hero.’

In 1969 the U.S. Army Corps of Engineers dammed the flow of water over the American Falls so geologists could study the bedrock to forestall the falls eroding into a series of rapids. The engineers shored up and strengthened such faults as they found. The falls was dry for five months before the dam was removed.

As my niece and I continued our walk along the gorge we passed the zipline that runs down to the old power station below. We stood around to watch as a couple of intrepid souls launched off the tower above. I combined a couple of photos to get the panoramic shot below.

At the end of the zipline you can barely make out the old powerplant. The mothballed electricity generating station will re-open later this year as a tourist attraction. Niagara has long been a center of power generation for both New York and Ontario. No surprise then to find a statue of Nicola Tesla, the inventor of alternating current electricity, along our walk. Around a bend and we could finally see the full majesty of the Horseshoe Falls.

Continuing our walk we came to the Table Rock visitor complex. Situated right at the edge of the falls, the large outdoor patio takes you right to the edge of the falls. The water here is a churning mass until it breaks the edge and soars into the chasm. Today the sound of the falls is a thundering low rumble. Half the water is diverted for power generation so it is not as loud as it once was. There are also a great many competing sounds. But in 1751, the Finnish explorer Peter Kalm noted the falls could be heard 45 kilometers away.

One of the attractions at Table Rock, which is a must-see experience, is the Journey Behind the Falls. In 1942 a tunnel was built 125 feet below ground and out behind the falls. It featured two portals behind the sheet of falling water so you could see the spectacle up close and hear the rumble of the falling water. The tunnels and portals were specifically made for the tourist trade.

Along the tunnel path there are a number of displays detailing the history of the falls as well as some facts and figures.

The Niagara River connects Lake Erie with Lake Ontario and the falls is 27 kilometers from Buffalo, New York at the source of the river. The river then continues another 29 kilometers to Lake Ontario. As the picture below shows, the riverbed is alternating layers of shale and sandstone and capped by a layer of limestone. The softest and fastest eroding are the shale layers. The harder limestone layer collapses under its own weight as more of the lower layers are eroded.

The next picture shows how the shape of the Horseshoe Falls has changed over time. In 1678, the “horseshoe” was just a gradual arc. As it steadily eroded over the years the shape changed to the familiar shape it has today. In modern times, a weir was constructed above the falls to slow the erosion and to divert water as necessary to hydro electric plants. The falls currently recedes about a foot a year, down from its uncontrolled rate of three feet a year. 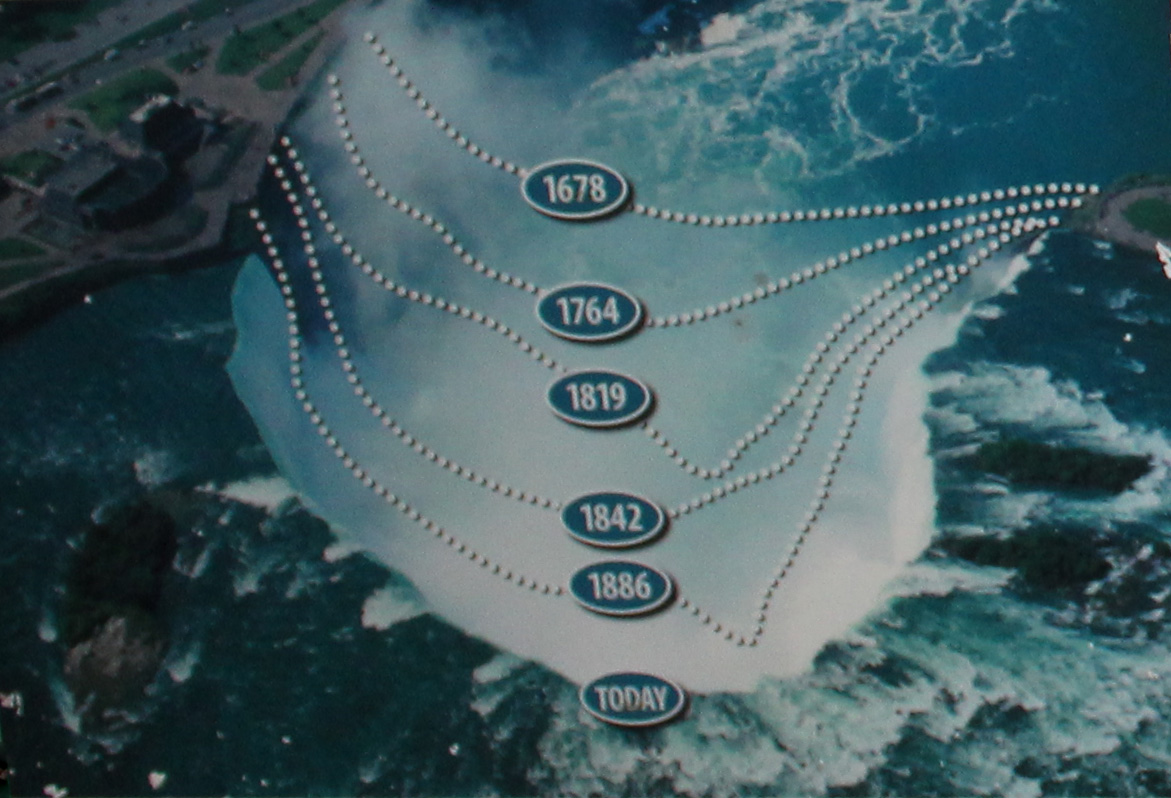 The tunnels also have an egress to a platform about halfway down the falls where you can witness the cascading waters in all their glory. You can also see how far over the lip the waters leap before plummeting to the gorge below.

As you can see, there is a considerable overhang which will eventually collapse as the soft stone underneath continues to erode. In the photo below you can see a small island and just to the right of it, a rusty old scow stuck on some rocks. 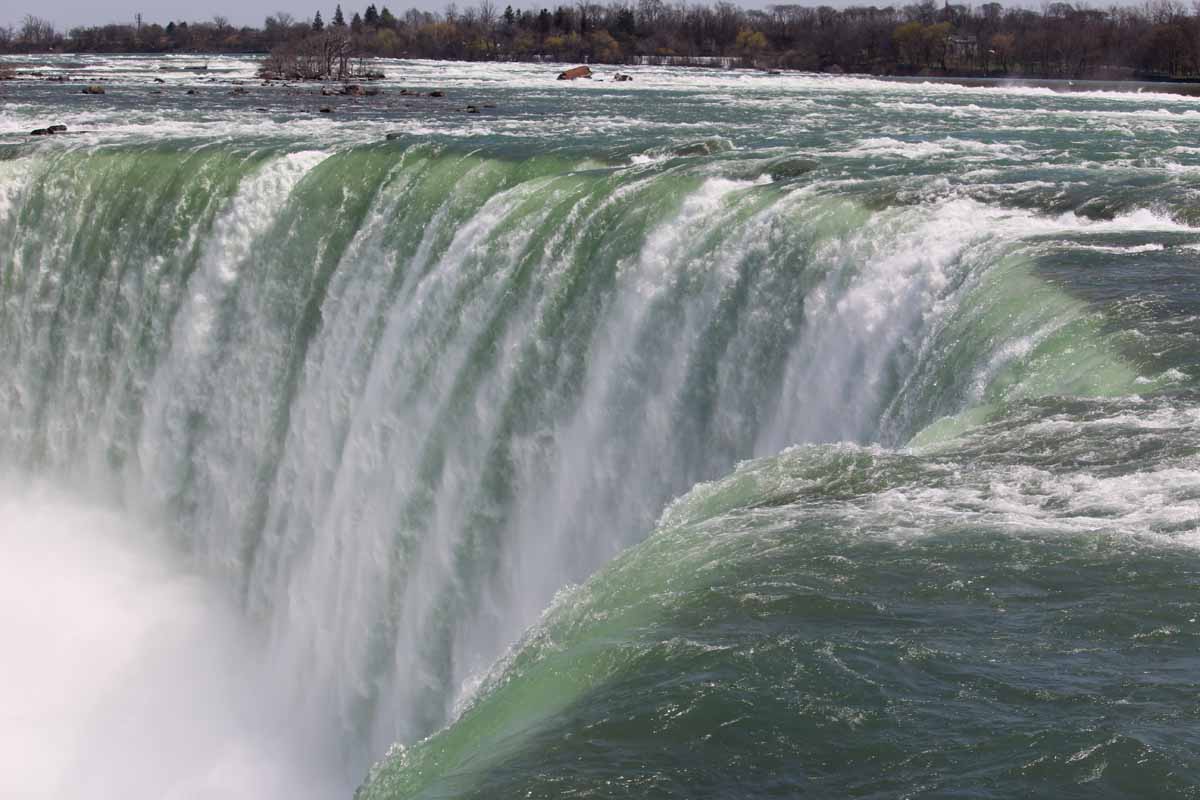 On Aug. 6, 1918, two men were on the scow as it dredged up sandbanks above the falls. When the tugboat towing the scow manoeuvred to bring it back to shore, it broke free and floated downstream towards the falls. It caught on a shoal 766 meters from the brink. The men were stranded for 17 hours before a U.S. Coast Guard cutter from Youngstown, NY arrived with a grappling gun to send a lifeline to the barge. The men escaped and the barge remained in its location until a storm on Halloween 2019 along with record high water dislodged the scow and it floated 50 meters closer to the edge where it remains today.

After spending some time seeing the falls up close and personal, Kathryn and I started our walk back to the car lot. We stopped to take a trip to the observation level of the Skylon Tower for a view of the falls from 775 feet up.

During tourist season, the Maid of the Mist tour boat takes you through the lower gorge to the foot of the falls. We were too early in the season and it was not yet operating, but my family and I took the trip in 1996 and it is well worth it.

The falls is steeped in history, including people deliberately going over the falls in barrel-like contraptions, some successfully and some not. On July 9, 1960, seven year old Roger Woodward was swept over the falls with only a life jacket after a boating accident and survived unscathed. Pierre Berton’s book Niagara: A History of the Falls is must reading for a detailed history of these and other events.

In 1953, the movie Niagara starring Marilyn Monroe was filmed here. And in 1980, part of Superman II starring Christopher Reeve and Margot Kidder was filmed here. We leave you with a clip from that movie, followed by a link to additional photos and video.