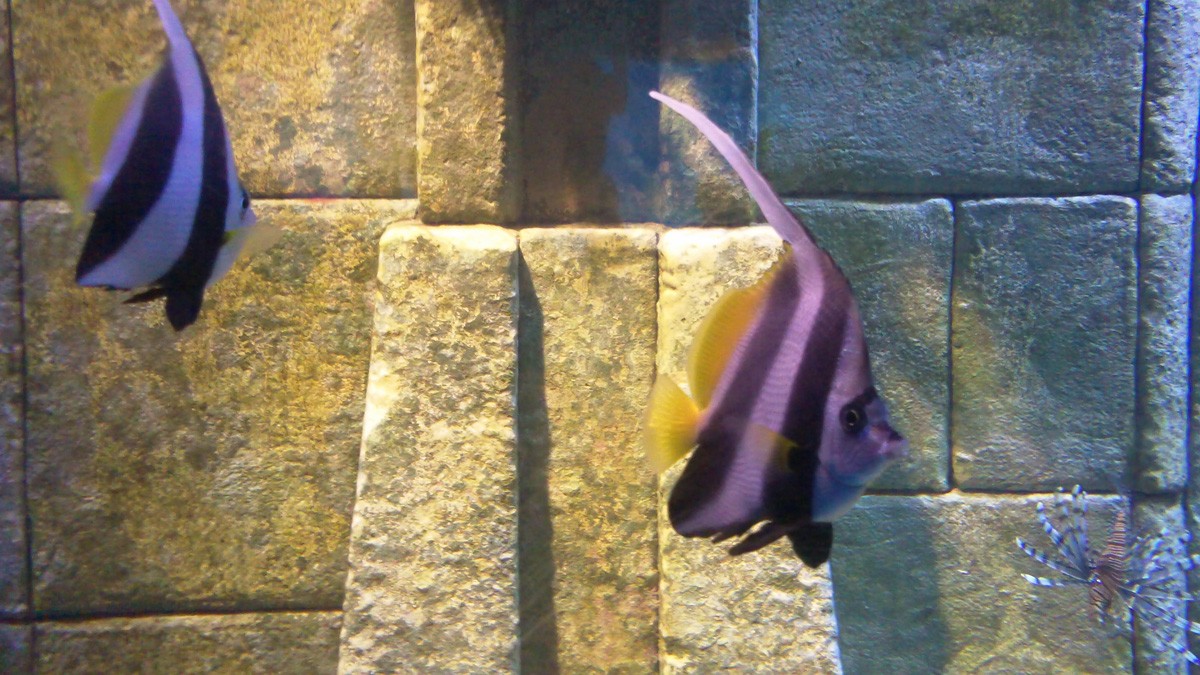 In 2002 Forbes Magazine had an article on the most expensive hotel suites in the world. Top of the list at $25,000 a night was the Bridge Suite at the Atlantis Resort in the Bahamas. Ever since, I’ve always wanted to see the Atlantis Resort.

In January 2015, my wife and I, her sister and her brother and his wife took a Caribbean cruise that stopped at Nassau in the Bahamas. One of the excursions available was to the Atlantis Resort. Naturally, we jumped at the opportunity.

The  Bridge Suite is in the bridge between the two Royal Towers. But the hotel complex shown above is just one of five hotel complexes and they also have the Harborside Resort which is a collection of villas and a marina if you want to stay there on your boat.

Besides accommodations, Atlantis has a 141 acre waterpark, beaches, pools, aquariums and  21 restaurants. There is also a street of shops you can check out. You can swim with the sting rays, snorkel, scuba dive, and get up close and personal with dolphins. It really is a destination resort with something for everyone.

Our tour barely scratched the surface of what there is to see. A bus took us from the cruise ship to Paradise Island where Atlantis is located. We met up with our guide who first took us through the casino. No picture taking was allowed inside the casino.

And then we got to the main part of our tour which is the aquarium. It’s a world class affair with many different species of fish. There is a clear tunnel you can walk through and watch the fish swim overhead and alongside. And there are many different aquaria, each with its own theme.

I’ll include more pictures in a separate photo gallery because I want to focus on the best part of the aquarium visit which was quite different and which I haven’t seen anywhere else. Many of the aquaria opened up at the surface to the outdoors and you could, in fact, walk around outside and look down on the fish.

When we finished our inside tour, our guide told us we could spend the rest of our time exploring on our own. She recommended checking out the feeding of the sharks and rays outside in about a half hour. So we went out and waited. Remarkably few people joined us. Their loss as what we saw was amazing. A young lady named Bianca, one of the curators at the aquarium, came out with a trolley filled with pails of fish. She fed some in one location and then walked across a shallow section of the immense pool field with sharks and rays following her around like puppies.

She climbed out of the pool and walked over to another area where she hand fed stingrays and zebra sharks. It was an incredible sight as these denizens of the deep snapped fish from her hand. She sometimes patted their heads and you could see she had a great affection for these beasts. And they seemed to like her as well.

My wife asked Bianca if she named her charges. Indeed she did using names from Greek and roman mythology. But she only named the rays and sharks. Too many other fish to name them all. Amazingly, she could identify which sharks and rays were which though they all looked much alike to me.

In the video below, Bianca explains the names of her fishy friends. But watch that zebra shark just snap up that last fish as she tries to identify him. Chomp! So cool!

We still had an hour or so after the feeding session so we explored some more of the Royal Towers complex. Outside the casino was an immense abstract sculpture, one of five that each cost over a million dollars.

We headed for the lobby and came across the Throne of Atlantis. Naturally we had to try it out. It was big enough for two!

The lobby area had an immense atrium with intricate carvings and fluted columns. Quite amazing.

We inquired about the Bridge Suite and yes, it was open to tours. Unfortunately, we did not have enough time before we had to return to the cruise ship. Another time for sure.

Our tour guide had told us that it was informally know as the Michael Jackson Suite as he was the first person to have stayed there. It rents for $25,000 a night with a four night minimum.

I recently checked online and it is no longer the most expensive hotel suite in the world. In fact, it slipped to number three in 2003 and it is not even on this year’s top 15 list. A lot of fancy hotels have been built since 2002!

But I also checked to see how much a stay at Atlantis would set back the average person. The budget complex, still pretty fancy, is the Beach Tower. There is currently a special on if you order before July 20th. Forty percent off. I did a tentative booking for a week in early October and it costs a much more affordable $129.14  a night.  I think a week at Atlantis just might be in our future!