When we booked our excursion online for Cartagena, we knew nothing about the city. Since we booked a tour of a 16th century Spanish fort, we thought it might be a sleepy little city like Cadiz or Malaga in Spain. Malaga is actually a good size with around 570,000 people but it doesn’t seem large. It has two castles within walking distance of the cruise port along with lush gardens and cobblestone streets.

We were quite surprised to learn that Cartagena actually has a population of a million. It is a modern, bustling city and a major seaport. One thing tourists might be happy to know is that there is free wifi provided by the city. I don’t know if this is citywide or just in the old parts of the city which are tourist destinations.

Though a modern city, Cartagena is steeped in history. And our tour took us through a lot of Spanish American history.

Our first stop was the Castillo San Felipe de Barajas, an old Spanish fortress dating from 1536. The original fort was expanded in 1657. In 1984 it was listed as a World Heritage Site by UNESCO.

The front facade is impressive. Massive stone walls surround this hilltop fortress. Access today is by a sloped roadway leading up to the castle proper. The picture heading up this blog post is a composite of three pictures as it was too large to get it into one picture from directly in front of it.

Cartagena has a mix of wealth and poverty, and street hawkers are common. They had their souvenir stands all along the walkway. One fellow, and we don’t know if he was a busker or hired by the castle, was in costume playing trumpet. He’d ask what country you were from, and would play something relevant. He played a few bars of Oh Canada for us.

We strolled up the sloping roadway to the first level and from there we took a long tunnel up to the top level.

From the top you command an excellent view of the city.


There were a number of guard towers along the top as well as cannon emplacements.

The one downside to cruise ship shore excursions is that they give you a flavour of a place but are too short to really enjoy something in depth. Though we spent maybe 45 minutes to an hour at the fortress, you could easily spend several hours exploring.

The Shops and the City Wall

The Castillo San Felipe is just one of ancient Cartagena’s fortifications. It served primarily to protect against an inland attack. Facing the sea is a battlement that extends around the old city. It is, in fact, a walled city.

We were soon herded back on the bus and made our way to the a tourist shopping mall of sorts. Our drive tool us along a boulevard outside the wall. The shops lie just below one flank of the wall.

Our guide told us while we were on the bus that there are a lot of buskers and street folks trying to make a buck in Cartagena. He told us not to take photos of women with baskets on their heads or people posing as living statues. They will want a dollar from you for taking their picture. And others will move in trying to get you to take their picture as well.

The Carmen Mirandas were prevalent at this mall, and I found them so enchanting, I gave one a buck to have her picture taken with Janis.

We saw women carrying baskets on their heads throughout the rest of our visit to Central America, most notably in Guatemala. Amazingly, they don’t hold onto the baskets or bowls. They just walk around with them perfectly balanced. It must give them a start if ever they have to sneeze!

Behind the shops was a battlement above the wall that encircles the old city. It has been incorporated into a vast park and boardwalk.

From the market we took a short bus trip to a section of the old town, historic and well preserved buildings from the past. They were a colorful sight. Many had beautiful balconies, often festooned with flower baskets.

Now our guide had warned us not to take pictures of people without permission. Take a close look at the next picture. You’ll see the people of the tour bus walking past some of the old houses. And you’ll note a statue of a fisherman in front of one of them. Not!

It was one of those human statues, a busker pretending to be a statue. He was very, very convincing. I actually thought it was a statue. After the crowd had thinned, I lined him up in my camera and was just about to take a picture when he moved forward and asked for a dollar. Well he moved too soon. I hadn’t taken the picture yet and told him so. I wasn’t paying for a photo I hadn’t taken. He chased me down the street for a block demanding money and finally gave up. Below is a blown up section of the above photo. I’ve lightened the shadows so you can see it is actually a person.

If I had already taken the photo, I would have felt obligated to pay him and would have.  But these folks could really take a lesson from the human statues we saw in Malaga, Spain in 2009. There the statues have a hat for donations in front of them and if you toss in a coin, they start to move. Everyone wants to see them move. They haul in a lot of money.

From there we went to the Museum of the Inquisition. The Spanish Inquisition’s tentacles reached out even to the Americas. Cartagena was the third center for this evil and nefarious monstrosity this side of the Atlantic after Lima and Mexico City. 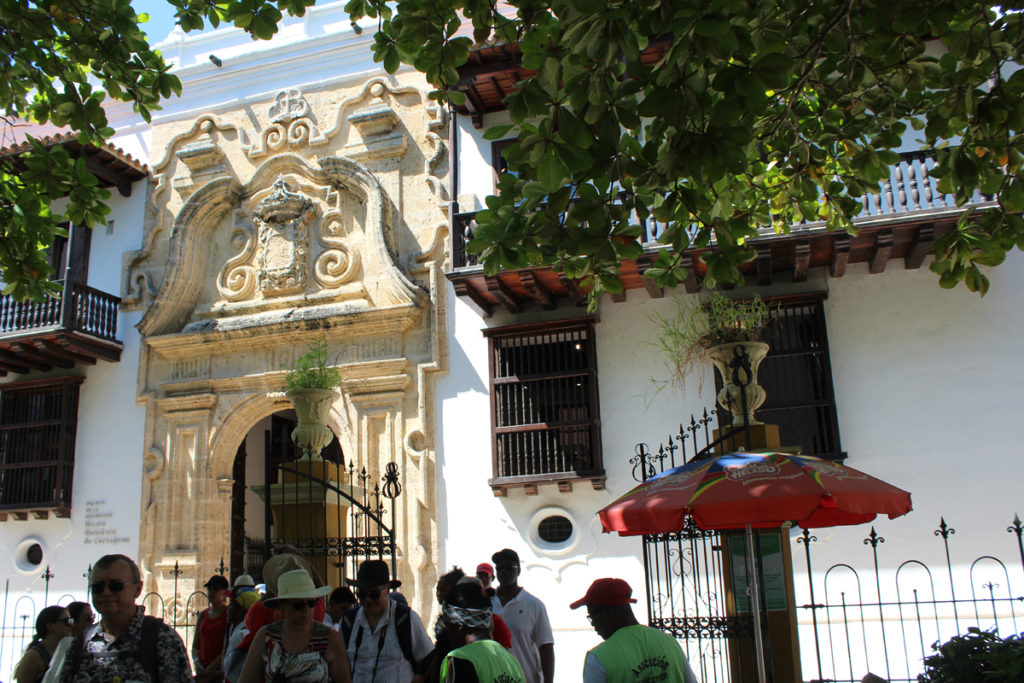 The Museum of the Inquisition is through these gates. which lead to an inner courtyard and then to the museum.

Our tour of the museum was very abbreviated, taking in a preview section consisting mostly of signs relating the history of the inquisition in the Americas. The museum consists of three houses built around 1770 to serve as headquarters for the Court of the Holy Offices. The inquisition had been operating in Cartagena since 1610.

A sign at the entrance has the curious wording:  Inquisicion Derechos Humanos y Convivencia – Inquisition, Human Rights & Conviviality. There is nothing convivial about the inquisition, but a large sign relating the history of the buildings and the inquisition explains the incongruity: “This house, being a space dedicated in the past to the intolerance, today is turned into a scenario of healthy conviviality around the Memory of the City and its people.”

Inside were displays, mostly signs, explaining the history and practices of the inquisition.  There were also a few replicas of torture devices used to extract confessions from the accused. One sign notes that no accused was ever acquitted by the court.

What could have a person arrested by the court? In a word, heresy. The sign below explains.

The Inquisition in Cartagena operated for over two hundred years, from 1610 to 1821. During that time nearly 900 people were prosecuted. Five were burned at the stake. There were 56 autos de fe, a ceremonial procession at which the accused were to confess their crimes. These could be compared to the Stalinist show trials in the Soviet Union.

Outside, another courtyard showing more instruments for the destruction of human beings – a gallows, and, curiously, a guillotine, though the guillotine was never used in Cartagena. It was used by the French at Devil’s Island off the coast of French Guiana.

After our short visit, we proceeded through Simon Bolivar Park with its large statue of the liberator of South America. Known as El Libertador, he liberated  Venezuela, Bolivia, Colombia, Ecuador, Peru, and Panama from the Spanish Empire.

And from Simon Bolivar Park we walked to the Iglesia de San Pedro Claver.  Pedro Claver was a Spanish Jesuit priest and missionary who, ironically, arrived in Cartagena the same year that the inquisition started – 1610. But he was not one of the zealots. According to Wikipedia, “he was deeply disturbed by the harsh treatment and living conditions of the black slaves who were brought from Africa.” He ministered to slaves all his life.

The church was built during his lifetime and was completed the year he died. Originally named the church of San Juan de Dios, it was renamed in San Pedro Claver’s honor after he achieved sainthood. He is regarded as the patron saint of slaves and seafarers.

Our guide asked us if we had ever seen the bones of a saint. No one had, but after the tour, we all had. San Pedro’s bones are housed in a glass case under the altar.

From the church we went out to the square and the surrounding neighborhood. Buildings in Spanish colonial style have a certain charm with their bright colors and window boxes.

It happened to be Janis’s birthday that day so we visited a gem shop endorsed by the cruise line. Colombia is known for its emeralds and I got her a beautiful ring with three emeralds. Down the street a bit we arrived back at the Simon Bolivar Park.

Besides emeralds, Colombia is best known for its coffee. You may remember the coffee commercials promoting Colombian coffee.

Now I don’t know if Juan Valdez was a real person or if he was an ad company’s creation, but he became the iconic symbol of Colombian coffee. We did not see a Starbucks in Colombia but were delighted to discover there was a Juan Valdez Cafe across from Simon Bolivar Park. Naturally we had to have a coffee there.

The area was a bustling one, lots of traffic and street vendors. I have an eye for the quirky when we travel. I am always intrigued by the offbeat and weird. Note the street hawker in the photo below. There is enlarged closeup after that.

She was not the only street vendor selling Big Ass Ants aphrodisiac. I saw at least three in the area.

In any event, our tour was now at an end and we hopped back on the bus and back to the port. But there was one more place to visit. There is a small but excellent zoo at the port.

The zoo featured lots of tropical birds as well as some animals, all indigenous to Colombia.  I have put together a separate photo gallery of the zoo.

All in all, Cartagena was one of the more interesting ports we visited. It is well worth a visit. Maybe circumstances will allow a longer more extended visit in the future.