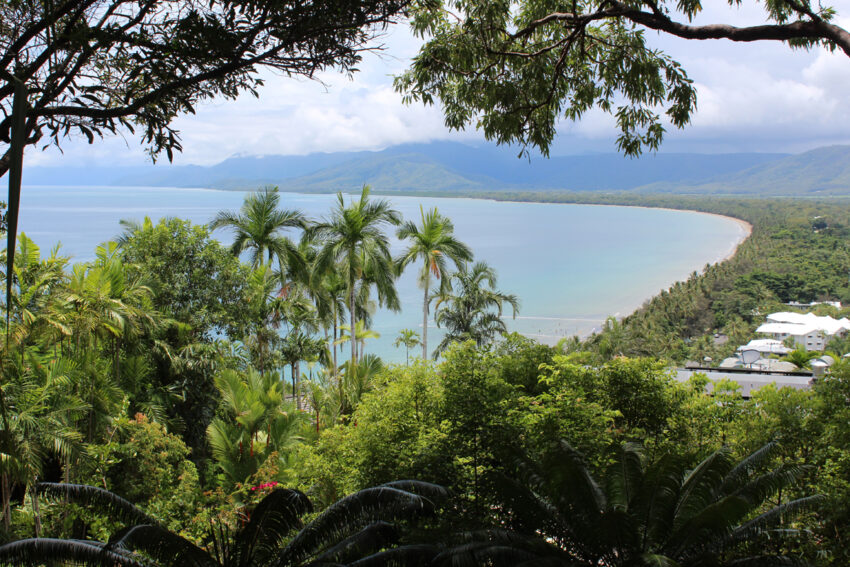 On our recent visit to our friends Ralph and KC in the Cairns suburb of Goldsborough, they took us far and wide to show us some of the magnificent scenery to be found in the region. North of Cairns to Port Douglas is a Mecca for tourists with gorgeous sandy beaches hugging the coastline. We visited a couple and found them bordered by hotels, restaurants and resorts nestled into the lush vegetation that abounds here.

All Australian beaches have their hazards, of course. The many sandy beaches around Perth where we have been living for over half a year are regularly patrolled by helicopters on the lookout for sharks. Around Cairns the dangerous critters are smaller but no less hazardous. Maybe even more so. While the Western Australia beaches are wide open and well used—windsurfing is popular there—around Cairns, relatively small sections of the beaches are caged off from the wide expanse of sand by heavy duty netting supported by floats. These nets run down to the sea floor and are meant to keep out crocodiles and jellyfish, popularly known here as stingers. It is recommended to swim only within these netted areas.

While the larger jellyfish are kept at bay, tiny ones like the irukandji are small enough to get through the netting. These tiny stingers are the size of a fingertip and as long as your index finger if you include the tentacles. The swimming area at Palm Cove was closed when we were there because of an irukandji hazard. Symptoms of a sting include minor skin irritation followed 5-40 minutes later by “severe generalized muscular pain, headache, vomiting and sweating.”

Palm Cove is a lovely resort town with a wide expanse of beach. Lush greenery abounds. And at the end of the beach you’ll find a jetty that runs out into the sea. Some people fish off this pier. Others, like ourselves, stroll along it for the magnificent view. Nearby are two islands, Double Island and the much smaller Haycock Island. The latter is actually shaped like a haycock. Both are surrounded by reef.

While we were there we saw a cruise ship anchored offshore. It was the Royal Caribbean’s Quantum of the Seas. Passengers are ferried to shore for excursions by tenders.

We ventured on to Port Douglas, about 40 kilometers north of Palm Cove. Named after John Douglas, a professional politician who served a short term as premier of Queensland, the town is today a thriving resort town and wealthy enclave along the coast. One of its features is Flagstaff Hill. From the hill’s summit lookout you can see a wide vista of beach stretching all the way back to Cairns. The featured photo that heads this post shows this scene. As does the one below.

But while the beaches north of Cairns are popular tourist Meccas, the lovely beaches south of Cairns also have something to offer. One is Bramston Beach, about an hour south by car from Cairns. There is a campground here as well as a caravan park. The beach is a sea turtle nesting area. There’s a boat ramp onto a nearby stream that runs to the ocean. A sign warns against cleaning fish or discarding offal near the ramp as it attracts crocodiles.

A bit south of Innisfail is Etty Bay Beach. It lies along an area known as the Cassowary Coast. Etty Bay Beach is a popular hangout for the great flightless bird, especially when there are people about. Although it is forbidden to feed the cassowary, they like to follow people around hoping for dropped scraps. The beach is remarkable as one of the locations where the rainforest meets the sea. We walked along the beach and the shore merged with a dense thicket of seemingly impassable jungle. It’s quite a sight.

We did not see any cassowaries, though there was an amusing warning sign, part of which ominously reads “Let us enjoy the magnificent cassowary from a safe distance otherwise it might try to kill you. (Not even joking)” Although Etty Bay Beach is a remote wilderness beach, there was a designated safe swimming area surrounded by a boom with netting.

Not surprisingly in an area with a long mountain range and tablelands, there are many waterfalls in the region. Here are a few.

Near the town of Babinda you’ll find The Boulders Gorge nestled in the foothills of the area’s highest mountain, Mount Bartle Frere. A two kilometer hike takes you along a raging creek through dense jungle to a place called the Devil’s Pool. At the trailhead by the parking lot is a much wider and calmer area that is a popular swimming hole. The water, while cool, is not cold enough to deter adventurers and bathers.

There are a number of plaques honoring the crew of a USAF B-25 bomber that crashed on Mount Bartle Frere during WWII, as well as the locals who went out on search parties to find the missing plane.

Josephine Falls is fifteen kilometers from the summit of Mount Bartle Frere, the highest peak in Queensland. There is a hiking trail that starts here leading to the summit. And another short trail leading from the parking lot to the falls itself. As with many of the creeks and waterfalls in the area, there are warning signs not to venture out onto the rocks. Dangers abound not the least of which is sudden unexpected flash floods. 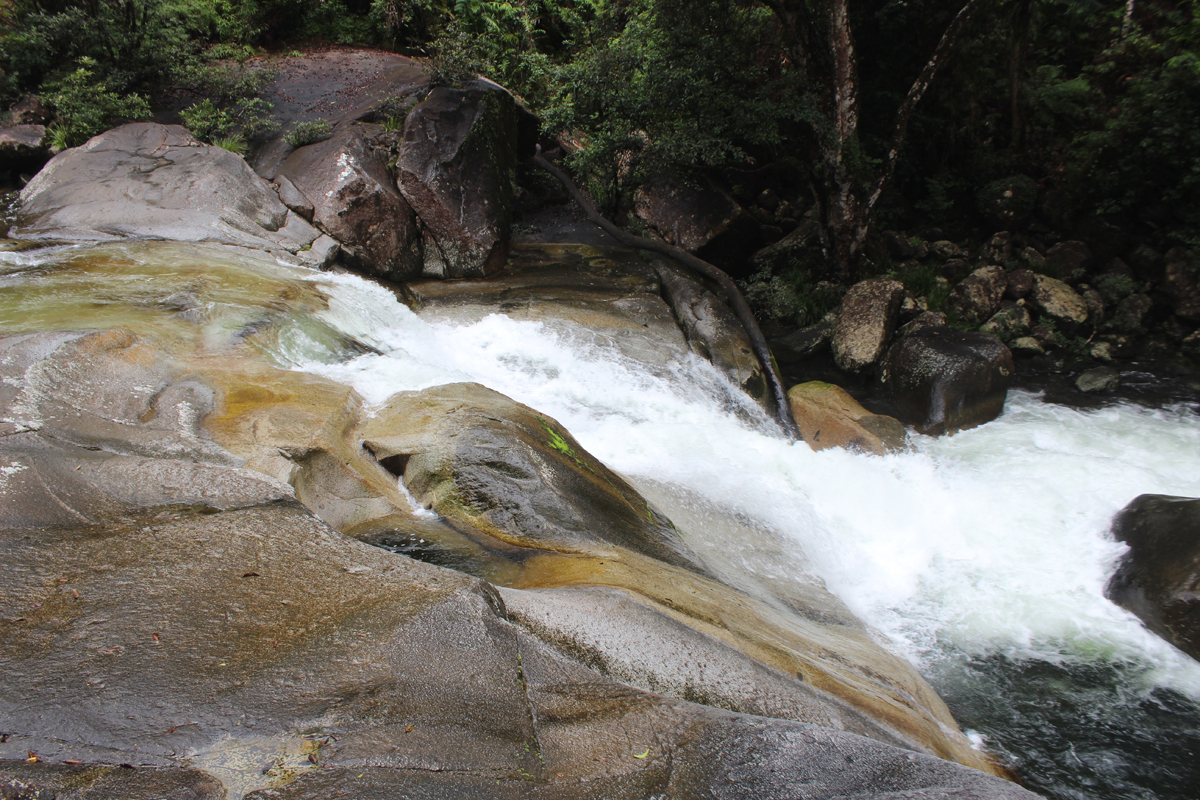 One of the most beautiful and popular waterfalls in the region is Millaa Millaa Falls, often shown in travel brochures. Like the pool at The Boulders, a relatively calm and wide pool at the base of the falls is popular with swimmers and bathers.

While we never did see a crocodile, a cassowary or a duck-billed platypus (also native to the region), we did see the ubiquitous wild turkey! 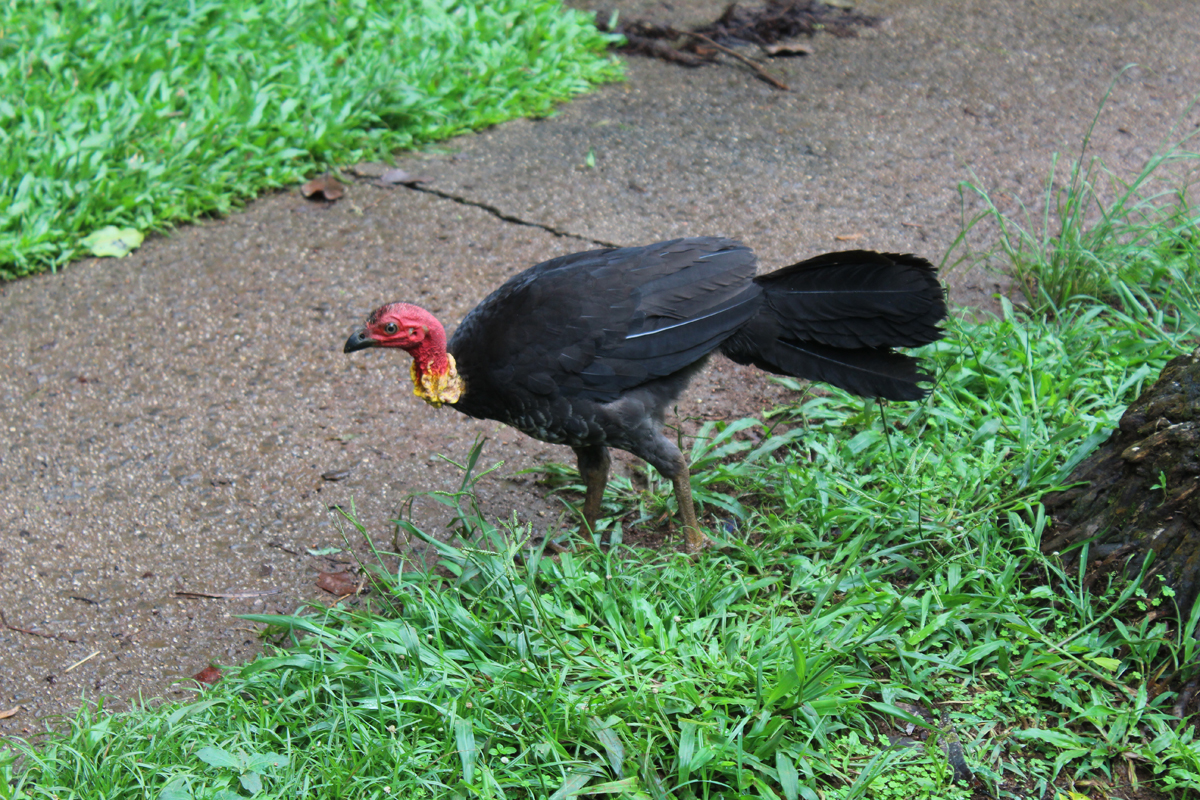 There will be two more posts in this series on Cairns and surrounds. Our next trip takes us to the Tablelands where well lunch at a small but very popular restaurant in the middle of nowhere. We’ll also visit a large mango winery and see two amazing fig trees. For our final outing we decided to spend a little money and took the 124 year old narrow gauge Kuranda Scenic Railway from the lowlands up through dense jungle to the little town of Kuranda on the tablelands. For the return trip we took seven and a half kilometer long cable car ride over the jungle and down to the lowlands again. The two stops included a fascinating rainforest information display.

Other Links of Interest