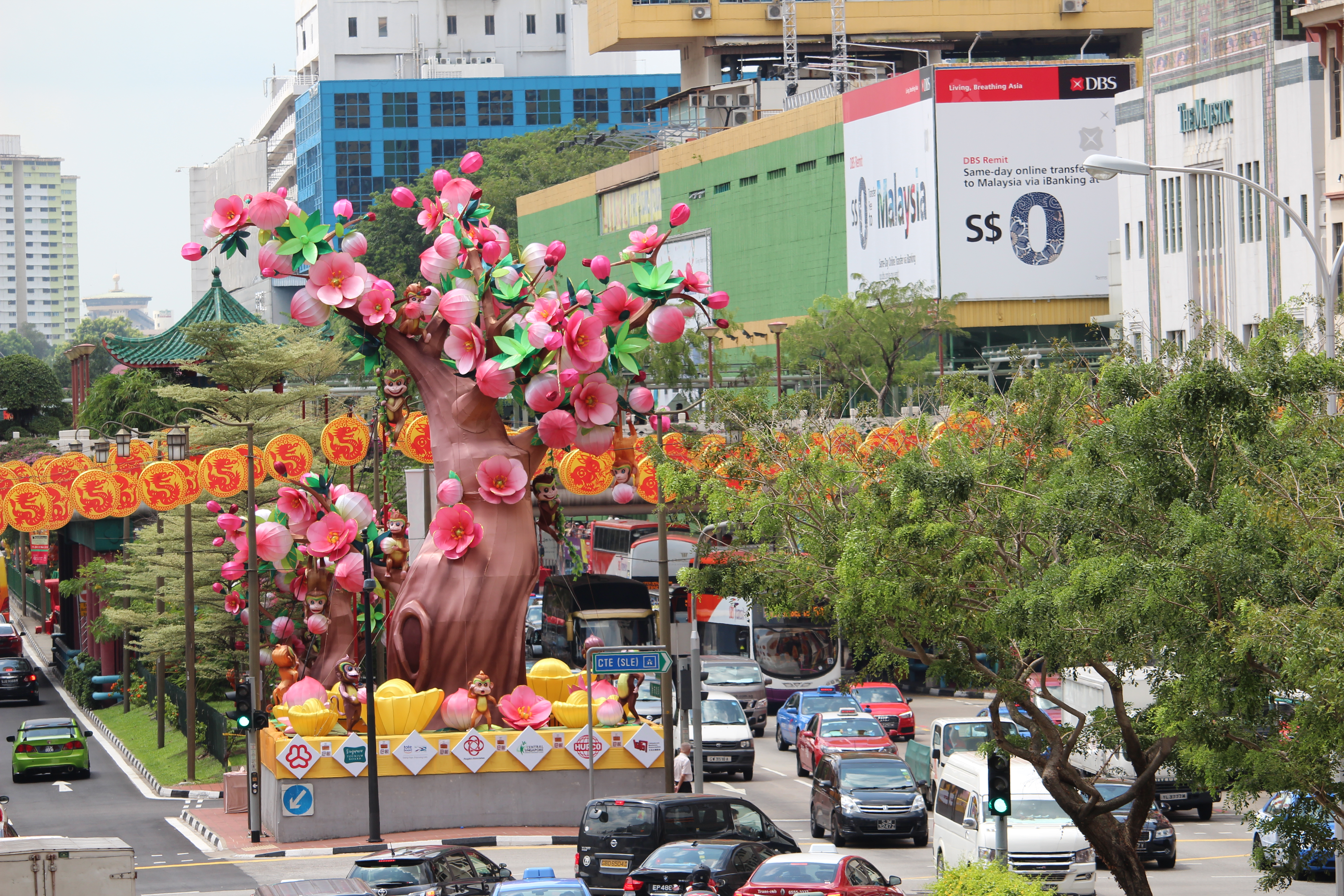 I was surprised to discover that Singapore had a Chinatown. Since most of the people are Chinese, I figured the whole city would be one big Chinatown, but that’s not the case. The city is a vibrant modern city with giant skyscrapers and shopping malls – lots and lots of shopping malls. Chinatown is more traditionally Chinese, an enclave within the modern city, much like the Chinatowns in Vancouver and San Francisco.

We first encountered Chinatown on our trip to our hotel after our cruise. We drove right by the gateway to Chinatown which was fully decorated for Chinese New Year which falls on February 8th. Our cabbie pointed it out and recommended a visit.

Since it was still morning and our hotel room would not be ready for a few hours, we opted to check it out. Our hotel was the Furama Waterfront on Havelock Road. It’s not near a subway station. So we asked the concierge where we could get a Starbucks coffee. He directed us to a twin office tower a few blocks away – the Great World City about a ten minute walk away. We found it and it has a terrific mall under the towers and a Starbucks. We had a coffee and checked our maps.

After our coffee break we headed outside to catch a cab and discovered there was a free shuttle bus to Chinatown. It runs every hour on the hour and since it was almost 11:00, we hopped the bus  which dropped us off on Upper Cross Street, just a block from New Bridge Road. We walked past the giant Og Department store and an alley leading to a large food court, then found ourselves at the gateway to Niu Che Shui as they call it in Chinese.

We turned right just before Hotel 81, whose windows look like sets of double doors that don’t open. Not surprisingly, Singapore’s Chinatown is much larger than Vancouver’s. Besides two Buddhist temples, it also has a Muslim mosque and a Hindu temple. New Bridge Street has many restaurants and food stores.

Colorful lanterns were everywhere and we soon turned down a narrow street with market stalls on each side. Most were selling clothes and souvenir trinkets.

We had promised our daughter’s fiancé we would pick up three silk ties for him, so we kept an eye out. Spotting some, we stopped and looked at the rack of ties and the vendor talked them up. How much? $20 each. But he offered two for $30. I asked how about three for $30? We decided to check out more shops and as we walked away he offered three for $40. We kept walking. Three for $30? Thanks we said. We may come back.

And we continued to walk until we came to another vendor. He was standing at the entrance and held out his hand to shake mine. I did and he wouldn’t let go as we were pulled into the shop. Do not shake hands with a vendor! It is a fish hook to get customers into the store!

In any event, we told him right off the bat we had an offer of three for $30 from another vendor. Oh no! he said. They can’t be real silk ties. His are the genuine article. He brought out a calculator and told us he could give us three of his superior ties for $55. Nah! No deal. We dickered. And we turned to leave. He came back with three for $30 and we bought them.

We continued to explore, passing a Hindu temple as we went up and down more streets. And what did we find? A rack of ties offered at three for $25! Same ties. Same labelling. Identical in every way to the other two vendors we had seen. So two rules about shopping in Chinatown. Haggle on price. Walk away and see what their best offer is. Shop around some more before making a decision.  We had committed to our purchase but wondered if we could have got the three for $25 guy to go even lower.

We got back to New Bridge Street and walked back passing an interesting sight we had noticed before. A lineup two blocks long to buy meat at a deli. Must be damn good meat I thought.

So I asked a vendor near by what the deal was with the lineup for the sliced pork. Seems that traditionally, Chinese people buy sliced pork to serve and to give away as gifts for Chinese New Year.

We passed Chinatown returning from Sentosa Island the next day and mentioned the lineup to our cabbie. He said there are other stores selling sliced pork for New Year, but this particular store had a long tradition of being the shop to get sliced pork.

One thing we did not see was the open air food shops common in Vancouver’s Chinatown with vegetables, nuts, grains and meats out on display. This is not to say that Singapore’s Niu Che Shui doesn’t have such shops, just that we did not see any.

We enjoyed the colour and spectacle of the area. We were fortunate to have been there just as Chinese New Year was approaching and there was such a festive air. But I am sure it is an entertaining place to explore any time of year.

Tomorrow’s blog visits the Gardens on the Bay.