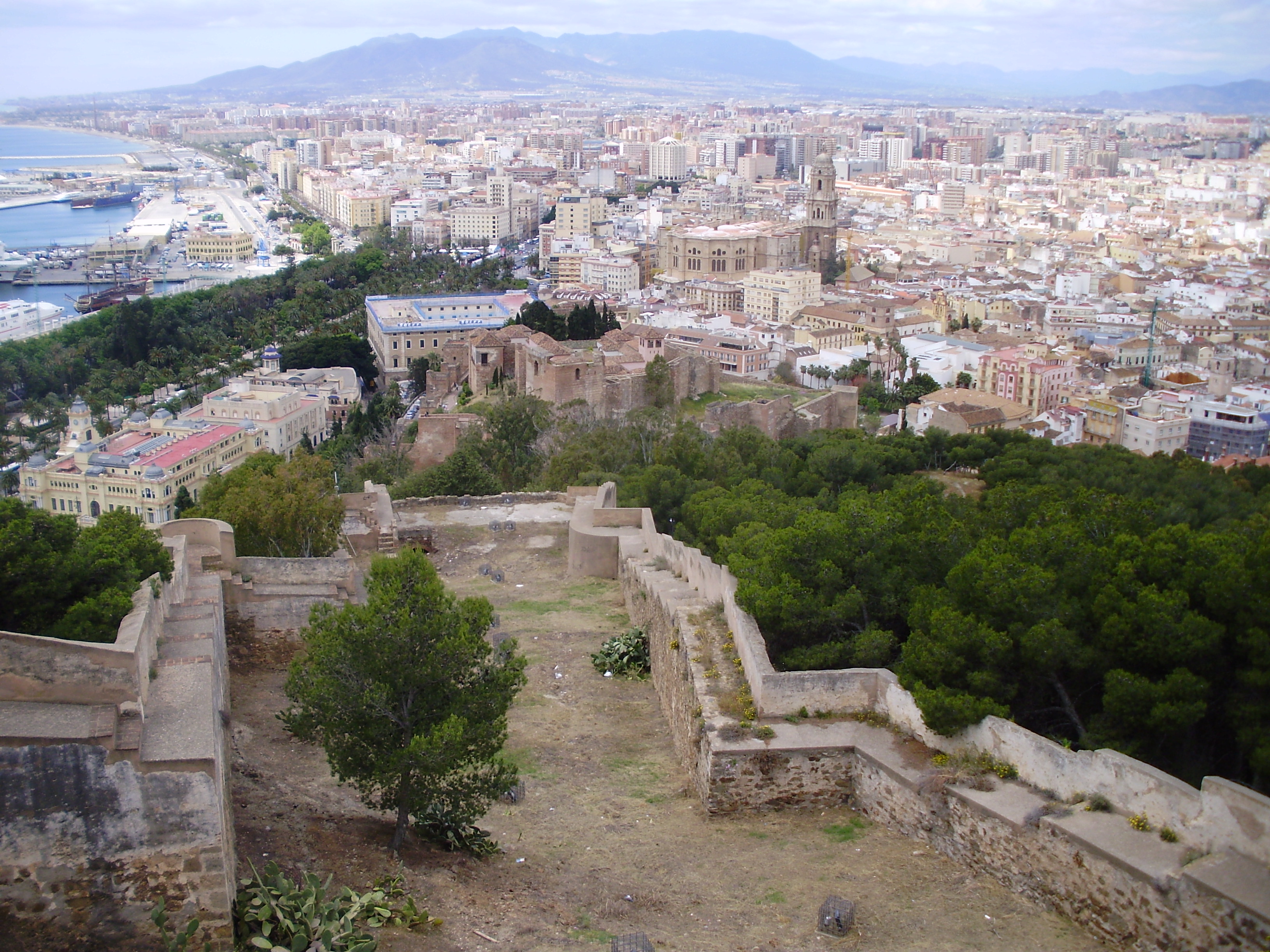 The fourth stop on our 2009 cruise was Malaga, a small Spanish city on the Mediterranean 134 kilometres from Gibraltar. As we did in Cadiz, we decided to explore Malaga on our own rather than take an organized excursion. The city is a short hop by bus from the port.

Malaga is an ancient city with a history spanning 2800 years. It was founded by the Phoenicians in 770 BC.  Like Cadiz, it is also within the autonomous region of Andalusia.

Upon leaving the ship, we took a short bus ride to the city. We were dropped off at the Paseo Parque, a broad boulevard spanned by parks on both sides. These parks are lush with greenery and the occasional statue and fountain.

We wandered though the Parque de Malaga to a road that took us to the first of two castles, the Alcazaba. The road is flanked by a steep retaining wall which is dotted with little pigeon holes.

Tha Alcazaba is an old fortress built by the Moors from 756 to 780 AD and extensively rebuilt by the Hammudid Dynasty in the 11th Century. It has features of Roman, Moorish and Renaissance architecture.

The roadway took us to an elevator which took us up into the fortress. Inside we found gardens and fountains as well as displays of crockery and other artifacts. There were also stables and drinking troughs for horses. We enjoyed walking around the battlements which command an excellent view of the city.

While we were there, a teacher dressed as a knight explained the history of the Alcazaba to his students. A colourful and interesting outing for the kids.

But the Alcazaba is just one of two Moorish castles in Malaga. The other is a short walk up the hill – the Castillo de Gibralfaro. The road is fairly steep and we passed fields of cacti.

Along the way we got a good view of the Malagueta, Malaga’s bull fighting arena. This 14,000 seat stadium was built in 1874 and bull fights are still staged every year from April through September.

Arriving at the Castillo de Gibralfaro, you enter through a museum showing military uniforms through the ages as well as a model of the two fortresses. There is a similar model at the lower fort. from there you can wander at your leisure. The fort is a large one and offers excellent views of the city from its ramparts. We circumnavigated the parapet as we had done with the lower fort.

At one point there was a sort of small dungeon below the walkway, with a grate above it. My wife and her friend Sheila went to check out the place while I stayed above with the camera. When they entered I shouted down to them, “Look up! Look waaaaaay up!” Someone nearby quickly added, “And I’ll call Rusty!” and we all had a good laugh. A fellow Canadian! The lines come from a popular kid’s show called The Friendly Giant.

We explore some more of the castle and then made our way back to the street level and a beautiful garden park called the Jardines de Pedro Luis Alonso.

We wandered back to downtown through the park flanking the Paseo Parque and stopped at a restaurant for some paella. Then we wandered through part of the downtown with its marble pedestrian ways and beautiful buildings. The city looked so clean and bright. A gorgeous city.

Along the way we came across some street entertainers. They were living statues. They were dressed in gray costumes and stood absolutely still like statues. If you put a coin in a hat, the statues came alive and posed for pictures and gave you a souvenir coloured pebble.

We wandered back towards the ship and passed a bus, half buried in the sidewalk. It was an ad, an unusual billboard for a movie, Fuga de Cerebros, a romantic comedy about young college students. It was panned by critics but the biggest drawing Spanish movie of the year, later released in English as Brain Drain.

We loved Malaga. It is a beautiful city with two great castles to explore, lush green parks, great restaurants an a colourful and entertaining downtown. Well worth a visit.

We took so many pictures you’ll find a separate photo gallery linked below. Or just keep scrolling if you’re on the home page.