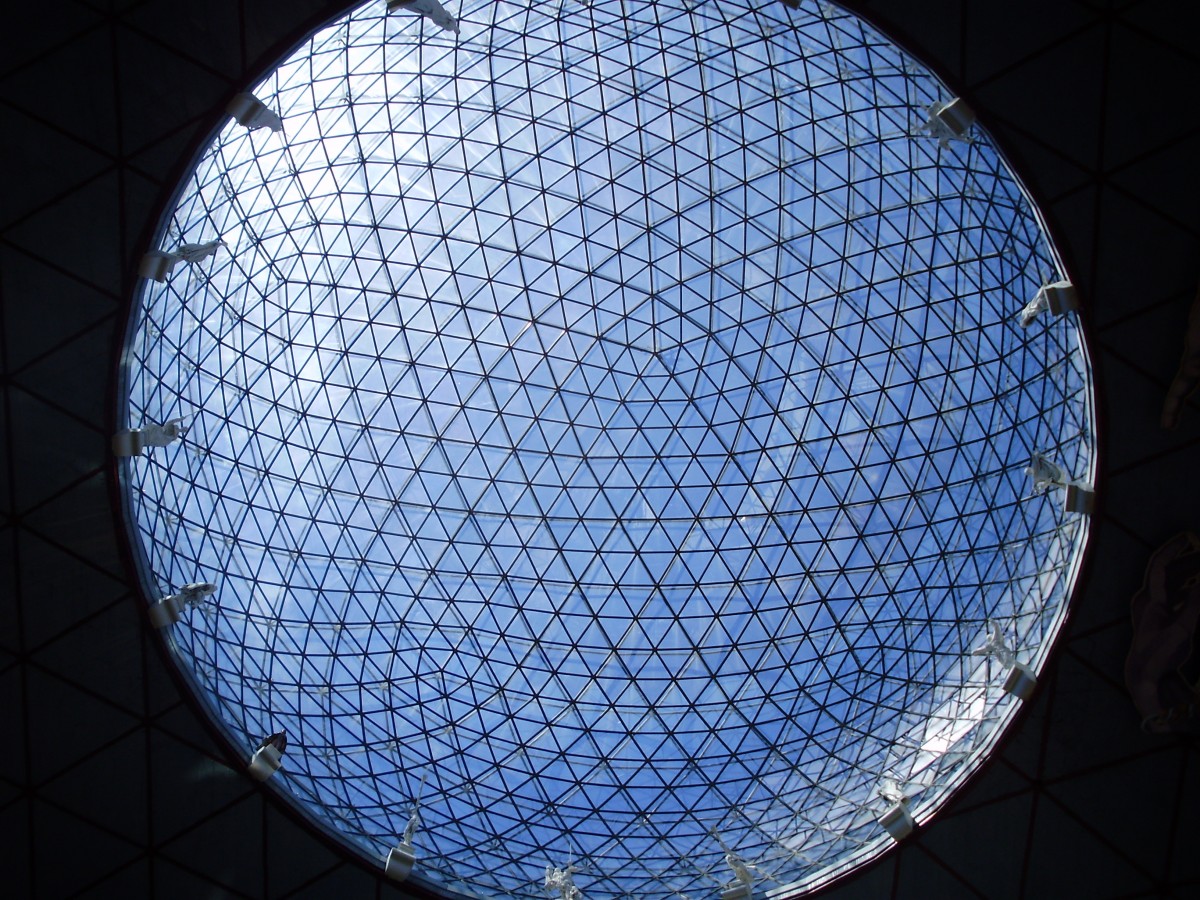 “I want my museum to be like a single block, a labyrinth, a great surrealist object. It will be a totally theatrical museum. The people who come to see it will leave with the sensation of having had a theatrical dream.”  – Salvador Dali

Figueres is the birthplace of noted surrealist painter Salvador Dali and the site of the Teatre-Museu Gala Salvador Dali – his famous museum. It holds the largest exhibition of Dali’s works in the world, including his personal collection. And it’s not just paintings. There are sculptures, three dimensional set pieces and a lot of interesting oddities that only the mind of the great Dali could have devised.

On the second day of our three days in Barcelona, we decided to take the train to Figueres, a small town about 25 kilometre from the French border and 140 kilometres from Barcelona. It’s a two hour ride through lovely Spanish countryside passing through the occasional small town along the way.

After arriving at Figueres, we left the train station and headed for the Salvador Dali Museum. Our walk took us through a large street market. It was May 1st, May Day, and the town was bustling. Among the street vendors we saw several with life size wooden carvings including one of Tintin, his dog Snowy and a bust of Captain Haddock. But the most unusual carving was a life-size Woody Allen!

Finally we arrived at the Theatre-Museum Dali. It actually was a theatre once which burned down during the Spanish Civil War. In 1960, Dali and the mayor of Figueres decided to rebuild the old theatre as a museum to the town’s most famous son, though actual construction didn’t begin until 1969. The museum opened in 1974 and expansion continued through the 80s. The master himself died in 1989 at the age of 84 and his body is buried in the crypt below the stage at the museum.

Even waiting with the long line to get in was a pleasure as the place is an artistic showpiece, inside and out. The front, where we were waiting features many sculptures, some on top of the building, some on the large balcony, and some in the courtyard.

On the balcony are several figures including a deep sea diver and statues carrying loaves of bread on their heads. Dali’s work is rich in symbolism and bread plays a large role in his work. The guide book says the diver is a “symbol of immersion into the depth of the subconscious that await the visitor.”

After going through the entrance, we passed into a open air courtyard. High walls form a semi-circle around the open space. The centrepiece is an old touring car, an exhibit called Rainy Taxi. Over the hood of the taxi is a statue of a huge buxom woman, The Great Esther by Ernst Fuchs. Behind the car is a huge stack of tires surmounted by two crutches (another element of Dali symbolism found in many of his works) holding a boat, Gala’s Boat. Gala was Dali’s wife and muse.

The car is called Rainy Taxi because it rains – not on top of, but inside of – the taxi. Inside is some greenery and two figures, the driver and a passenger. Live snails crawl around inside. The original Rainy Taxi was created for the 1938 Exposition Internationale du Surréalisme. The one at the Dali Museum is a reproduction.

Behind this tableau is a giant picture window through which you can see the large stage-cupola area. Above this room is a geodesic dome.

The room itself is immense and the centrepiece is the stage curtain, a reproduction of the backdrop for the ballet, Labyrinth (1941). Against one side of the room are displays of artwork in recessed alcoves. The most stunning is a large picture of Gala from behind in the nude. But looked at from a distance, the picture becomes a digital image – a portrait of Abraham Lincoln.

On the other side of the room is a staircase and archways to other galleries. There are a lot of them, some simply galleries of paintings hanging on the wall, and some much more than that.

One such striking room is the Mae West Room. It features a living room with two paintings on the wall, a cabinet with two cubby holes for displaying artwork, and a large sofa shaped like lips. At the front of this set are two large, billowing, yellow curtains pulled back and held by ropes. There is a short staircase to an observation platform in front of this and when you mount it and look at the living room set through a large lens, you see the stylized face of actress Mae West.

There is also a bedroom which features an elaborate bed on dragon legs above which hangs a large tapestry, a reproduction of Dali’s most famous work, The Persistence of Memory.

And yet another room is called the Palace of the Wind and is surmounted by a giant mural on the ceiling. Looking up you see the bottoms of two pairs of feet attached to figures standing up with their upper bodies out of sight in the clouds. The two figures are Dali and Gala “pouring a shower of gold over Figueres and Emporda” according to the guidebook.

There is much more to see here, including rooms with the furniture attached to the ceiling, and a display of stereoscopes. But even upon leaving the museum, surprise await you. As you exit, you look back and see a whole new aspect of the museum – a large rectangular building with a turret at one end. The walls are pink and festooned with figures of bread. Buns really. And on the top of the building, giant eggs alternating with waving mannequins.

The Dali Museum is truly amazing and well worth a day trip from Barcelona. I didn’t have the best camera when I made this trip. Nor did I take as many pictures as I now do on trips. But I did take enough to fill another photo gallery. Click on the link below or scroll down if you are on the main page of the blog. Do check it out!