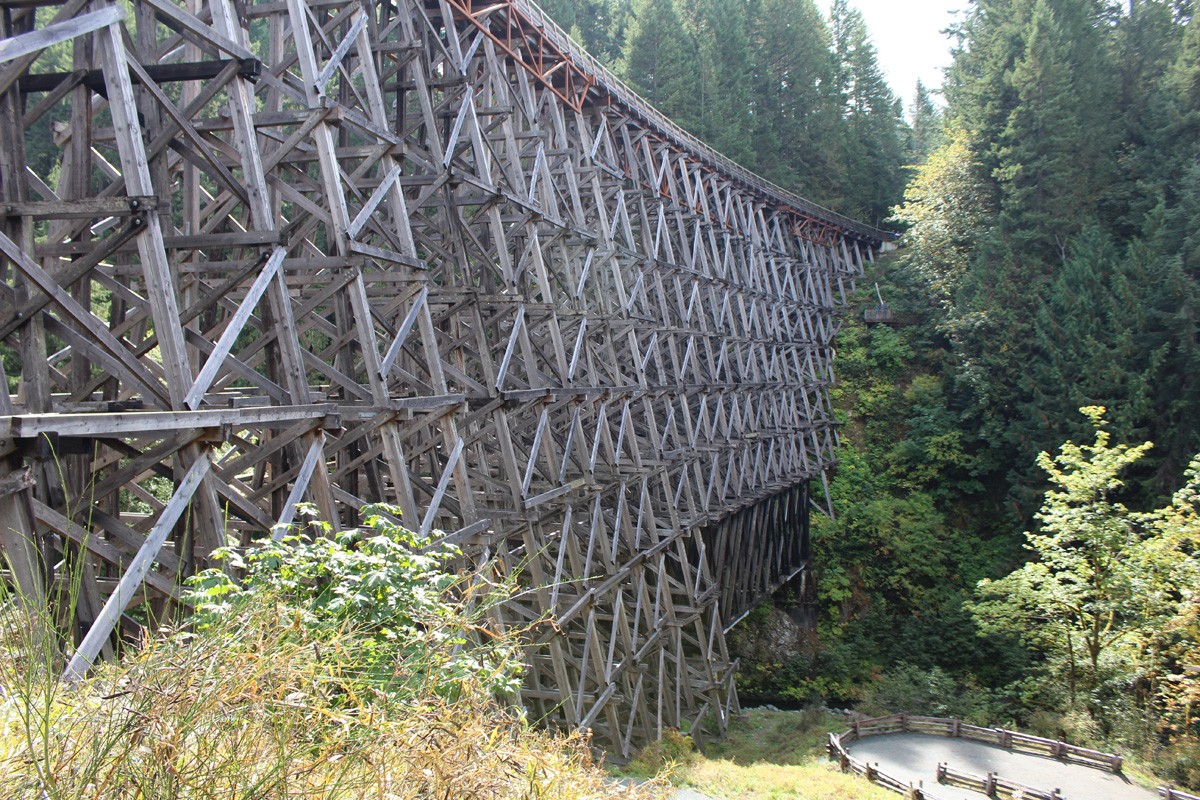 If you’re a railroad buff and visiting Vancouver Island, you might want to check out the historic Kinsol Trestle. It is a restored railroad trestle on the old abandoned CN Rail line and now part of the Trans Canada Trail.

The trestle is truly a marvel to see. The largest railroad trestle in the British Commonwealth and one of the largest in the world, it stands 145 feet above the Koksilah River with a span of 614 feet (0.187 km). It is also notable for its seven degree curve.

Work on the original Kinsol Trestle began in 1914 but was halted due to World War I. Work resumed late in 1919 and the twelve story structure was completed in 1920. It served mainly as an industrial road carrying timber and other materials. Although it crosses the Koksilah River, its name is actually a portmanteau of the King Solomon copper mine which operated near by. It is also called Koksilah River Bridge.

The rare passenger train crossing the trestle included 1954 excursion from Victoria to the Cowichan Valley carrying a load of railroad enthusiasts attending the national Model Railway Convention. The train stopped there on that occasion so the rail buffs could get out and take pictures.

The last train crossed in the summer of 1979 and the bridge then fell into disrepair. In 2008, after lobbying from various historical societies, three levels of government and a private trust combined resources to rehabilitate the landmark bridge. It reopened in 2011 as part of the Trans-Canada Trail.

From the parking lot, the trestle is a short hike along the abandoned rail line, now part of the trail. The walk is fairly flat.

At the trestle, you can go down to a lookout on the south side, or hike right down to the bottom on the far side. As high as a twelve story building, it is most impressive.

We spent a good hour at the trestle and then continued with a visit to Cowichan Bay, a quaint little seaside town of houseboats, fishboats and artisan shops. I’ll write about that in a future post!

Click on the link below for additional photos, or if you are on the home page, just scroll down.