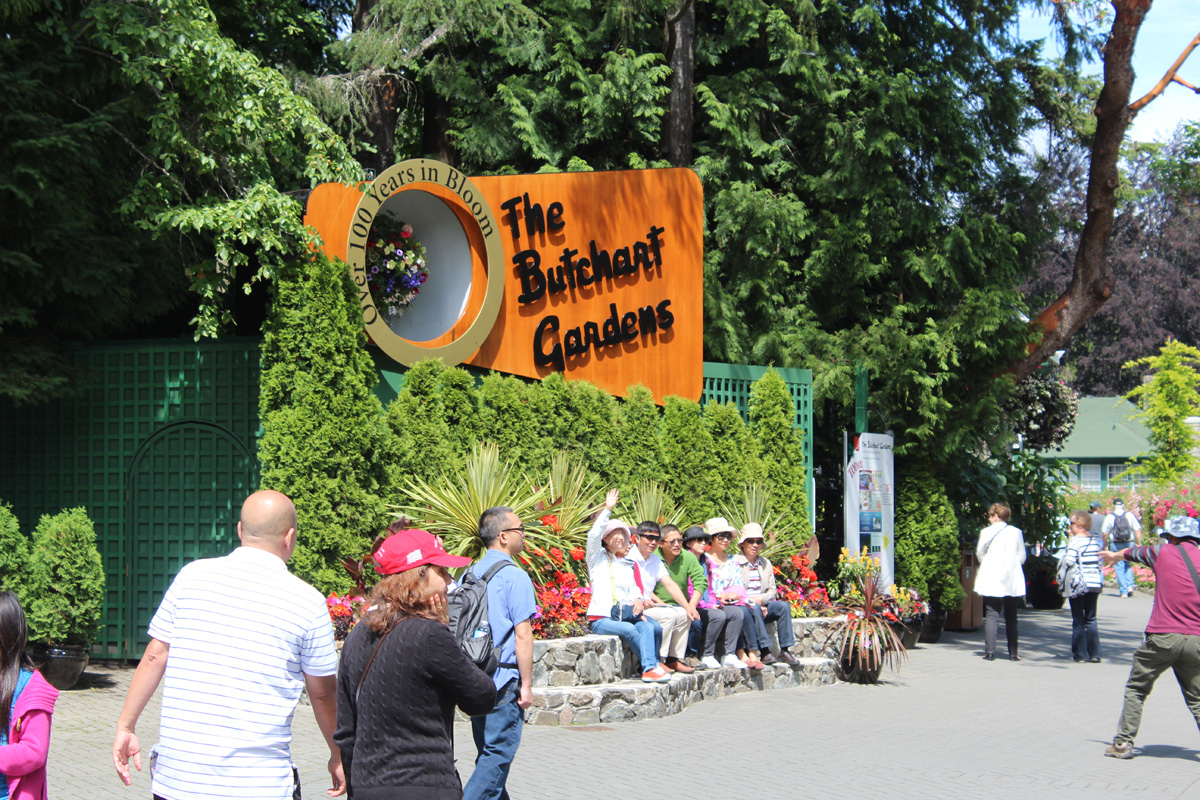 We first visited the Butchart Gardens on our honeymoon in August of 1981, almost 35 years ago. We have been back once or twice since, but it has been quite a while. This past weekend we visited once more. And it is as gorgeous as ever with many new amenities added.

Robert Pim Butchart and his wife Jennie bought the site in 1903, moving there in 1904 so Robert could build a cement plant. The area had natural limestone, an essential ingredient for Portland cement, so Butchart both mined the limestone from quarries on the property and built a factory to process the mineral.

Jennie started the gardens in 1906 when she hired Japanese landscape architect Isaburo Kishida to design and build the Japanese Garden, the first of many that would become the Butchart Gardens.

The first thing you see along the walking tour of the gardens is a bower of hanging baskets. Fuchsias, begonias and many other specimens make up this cornucopia of colour.

Hanging a left brings you to the Sunken Gardens, possibly the most striking feature in the entire gardens. Formerly a limestone quarry, Mrs. Butchart set out to reclaim it when the limestone ran out in 1909. It took over ten years of painstaking work before the Sunken Garden was finished in 1921. Workers commandeered from Robert’s plant drained the quarry and brought in tons of topsoil. Jennie Butchart had herself lowered in a bosun’s chair over the face of the cliffs to hand plant ivies.

In the middle of the Sunken Garden stands a pedestal of plant-covered rock called The Mound. A winding staircase lets you climb to the top for a panoramic view of the Garden.

Further along the trail you arrive at a lake. Dragonflies like to fly around above the lily pads here. Butterflies are also common at the gardens.

Walking around the lake you can look back and see the Sunken Garden through the drooping branches of two giant willow trees. Further along the trail we come to the Ross Fountain. The Butcharts gave the Gardens to their grandson Ross in 1939 on his 21st birthday and he maintained the garden until his death in 1997. Ross created the night-time illumination system in 1953 and the fountain in 1964 on the 60th anniversary of the gardens.

Leaving the fountain, we walk back along a trail that rises and brings us to the Childrens’ Pavilion and the outdoor amphitheatre. The rising path brings us past excellent views of the Sunken Garden on the right and in a grassy area on the left we see three deer made of sphagnum moss. There are a number of these mossy creations throughout the park, including a cougar, a couple of rabbits, some ducks and an owl.

The Childrens’ Pavilion and Rose Carousel were opened in 2009. The horse and other creatures were hand carved. It is the only carousel on Vancouver island. It costs $2 to ride and my wife and her friend hopped aboard.

Across from the carousel is an amphitheatre where live shows are held throughout the summer season and at Christmas. Further along the path are two totem poles and just beyond that is a vast open area and a lake where fireworks are displayed every Saturday evening in the summer.

Continuing our journey we come to several large apple trees flanking the amphitheatre and then the Dragon Fountain on the left. Still further along, another fountain, the three fishes.

From there we arrive at the spectacular Rose Garden. A path parallels the garden taking you through several colourful arches. Then the garden proper, a large circular grassy field surrounded on all sides by roses.

At the far end of the Rose Garden is a covered path, a series of arches made of roses. A stunning display.

Leaving the Rose Garden we come to the Japanese Garden. This garden trails down a hillside toward Tod Inlet where the family moored its motor launch and spent a lot of recreational time. The Japanese Garden was the first of the gardens built by Jennie Butchart.

There is a trail from the Japanese Garden to a dock where they now offer 45 minute boat ride around Tod Inlet and the surrounding area. On the other side of the garden is a trail leading up to the Star Pond. Robert Butchart liked wild birds and kept ducks in the pond.

And just past the Star Pond is the formal Italian Garden, built in 1926 on the site of a former tennis court. The garden is surrounded on two sides by buildings, one of them the main residence which is now a restaurant.

Between the buildings is a path leading you almost to our starting point. Here you’ll find the famous Wild Boar statue. An exact replica of the fanous Italian statue created in 1620 in Florence, Italy. Like that statue, this one’s nose is shiny from people rubbing it for good luck.

Without a doubt, the Butchart Gardens are a must see for visitors to Victoria. And if you’re a local, the season’s pass is a bargain at under $60. We spent five hours there, including an hour for lunch after four hours walking the gardens. We left at 4:30 PM. But after dark, the gardens are illuminated, creating a whole different look. And on Saturdays in the summer there are the fireworks. Definitely worth a repeat visit.

Be sure to click on the Photo Gallery below for more pictures, or just scroll on through if you are on the main page.