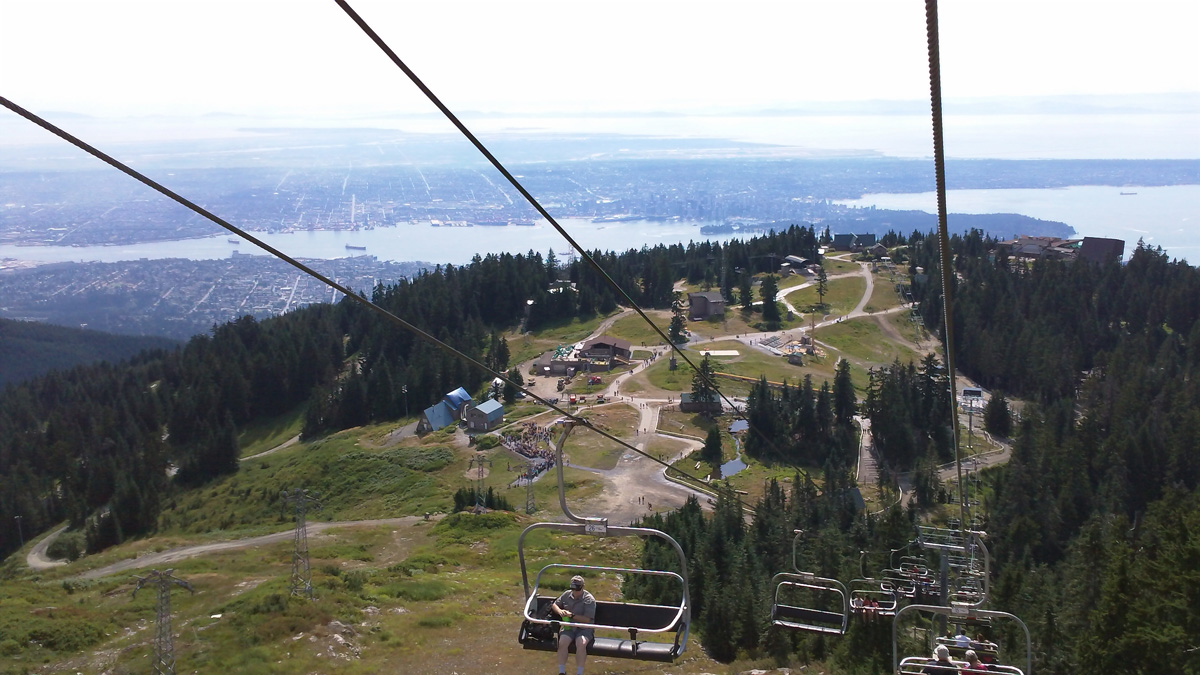 North Vancouver’s Grouse Mountain is a popular ski hill for locals but it is also a great destination for visiting in the summer. Not only is the view of downtown Vancouver spectacular from up there, the ski resort has a lot of amenities to appeal to the summer visitor. There’s even a helipad on the mountain if you want to take a scenic tour of the city by air.

The fun starts, of course, with getting there. Whether you go by car or are on a tour bus, your visit starts at the base of the mountain. From there it’s a scenic trip to the top of the mountain on one of the two cable trams.

Upon exiting the tram you’ll find the ski lodge ahead. It features several restaurants as well as some shops. Clothing, cameras and souvenirs, and in the winter you’ll find ski gear.

The view from the restaurants is breathtaking. But we’re not here to eat yet. Let’ saunter down the trail to see what we can find. Walking amidst the tall cedars we come across some large wooden sculptures. Figures of tree planters.

You’ll also find a large hollowed out carved stump. A popular spot to pose for pictures.

Just over the rise we come to a large meadow in a shallow valley. Here you’ll find the popular Timber Show. With shows several times a day, the Timber Show is a humor filled display of woodsman skills, including a climbing competition, log rolling competition, and chainsaw exhibition.

Off to the left is the large bear enclosure. A couple of large grizzly bears live here. You might have to look around for them as there is a lot of wilderness for them to hang out in as well as a bear house. We visited Grouse in the summers of 2012 and again in 2015. On the first trip we spotted the bears on returning on the chairlift from the Peak.

At the top of the Peak stands a wind turbine with an observation deck high above the mountain. Appropriately enough, it’s called The Eye of Vancouver. We took the chairlift up to the top to check it out, though we did not go up the turbine itself. Maybe another time. The view must be amazing.

There is also a zipline on top. One of two on the mountain. The other one is not far from the wooden carvings of the tree planters. The upper zipline crosses a canyon. The lower one soars over a mountain lake.

The side of the Peak slopes down at a moderate angle from the top and you’ll often find hang gliders launching from there. Fun to watch from above, as well as from below.

Taking the chair down again we headed left to an outdoor amphitheatre for the Birds in Motion show. This is my favorite show on the mountain. Several naturalists bring out a variety of flying raptors in turn and talk about these fabulous birds as they put them through some flying exercises.

Heading back on our first visit, we wandered around the lake the lower zipline soars over. It is a peaceful quiet walk featuring some aboriginal outbuildings. A nice way to end your day.

Grouse Mountain is a fun ski destination in winter, but personally, I prefer it in summer. I took a lot of pictures on both occasions we were there so I’ll add two photo albums. One is just of the Birds in Motion show which includes a number of video. The other is of the other sights around the mountain.