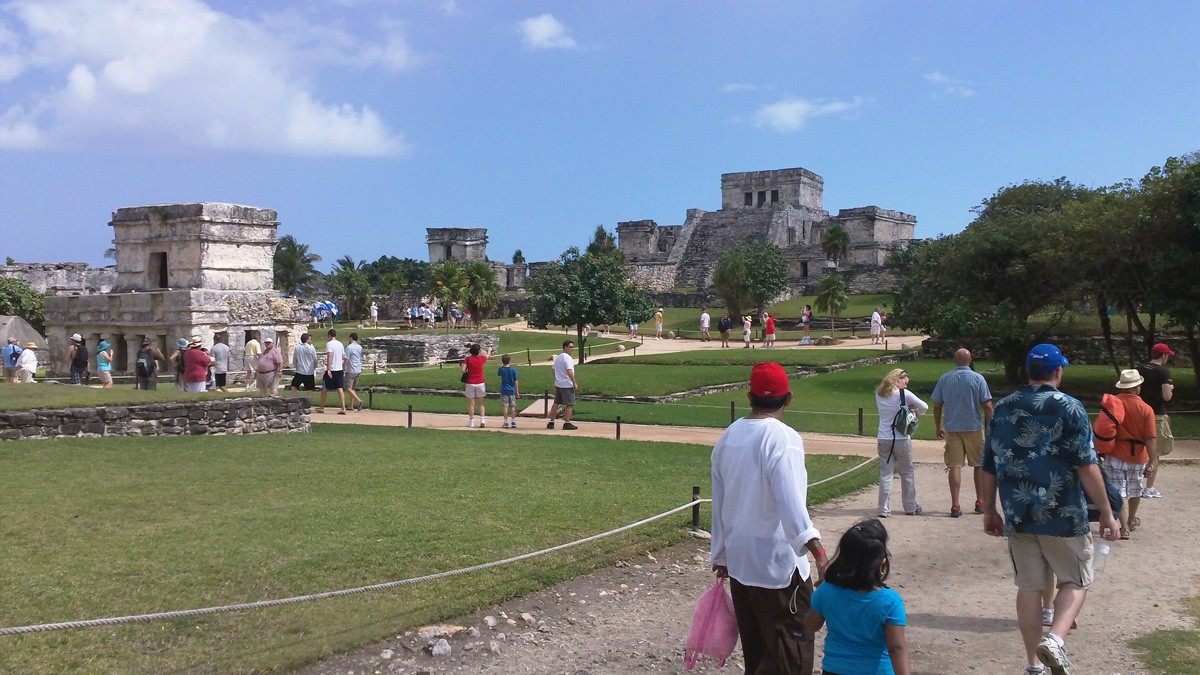 When you stay in Cancun, it seems almost mandatory to check out some ancient ruins while you’re there. The most popular is Chichen Itza which is 200 kilometres inland. But also popular though not as well known is the coastal Mayan city of Tulum. It is right along the coast 128 kilometres from Cancun.

Tulum was a walled city and a seaport, a major trading hub for the Mayan civilization with a population of around 1000-1600 people. It thrived between the 13th and 15th centuries but was decimated by diseases brought in by the Spanish. By the end of the 16th century it was completely abandoned.

Major restoration work began in and continued throughout the 20th century. It is one of the best-preserved Mayan excavations, though considerably smaller than Chichen Itza.

Tour buses leave Cancun daily for Tulum and we took one of these excursions. Onsite, a guide gives you a running commentary on the various different structures.  While you can explore in your own, we found our guide very knowledgable and helpful.

There are many structures on the site. The major ones include El Castillo, the castle, as well as several temples. The Temple of the Wind commands an excellent view of the sparkling blue Caribbean waters.

The Temple of the Frescoes stands in front of El Castillo, a  modest structure by comparison.

One of the things that sets Tulum apart from Chichen Itza is its location. It sits on a 12 meter limestone bluff overlooking the sea. Near El Castillo are steps leading down to a beautiful beach. If you’re planning a visit, be sure to bring your swimsuit!

We did not bring swimsuits as we did not know about the beach. But we did take off our shoes and socks and waded through the surf. There is also good snorkeling in the area.

Tulum is a site steeped in history with a majestic setting. Definitely worth checking out on your Cancun vacation.