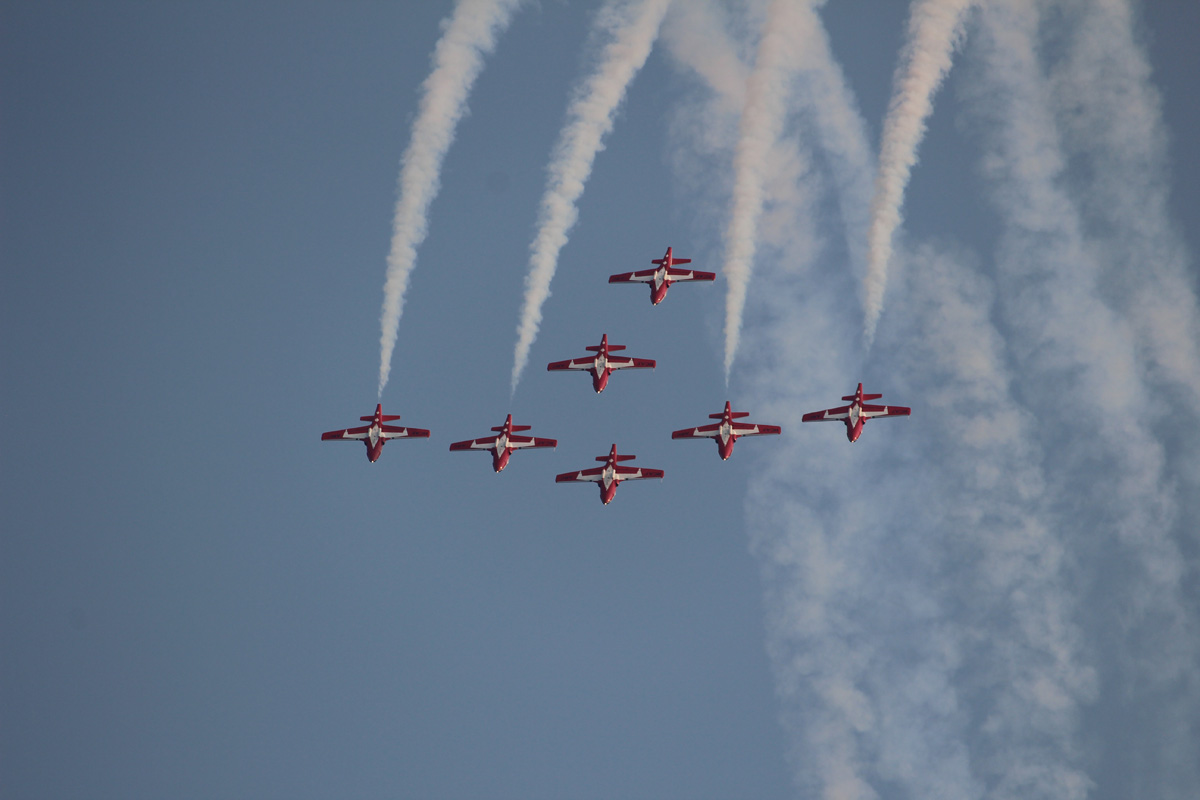 This year marked the 55th annual Abbotsford International Airshow. I first attended one shortly after I moved to B.C. in 1974 and have attended several times since then. When I was single we’d cram a bunch of us into a car and go together for a day. Later my wife and I took the kids to see the show every few years. But it had been over a decade since we last attended.

Now living in Abbotsford, we were sometimes entertained by mini-airshows as the jets, including the fabulous Snowbirds, sometimes roared right over our townhouse complex. But this year I really wanted to see the show right at the runway again.

The annual event runs for three days – always a Friday, Saturday and Sunday in mid-August. This year the Friday show was an evening affair, with gates opening at 3:30 PM and the show ending around 10:30 PM. We had never been to an evening airshow before, which promised some pyrotechnics as well a aerobatics, so we packed a bag with a couple of sweaters and headed out.

We bought our tickets at Save-on-Foods to save the hassle at the entrance and it’s a good idea to save money as well. Gate price per ticket was $30. At Save-on-Foods, only $25. We avoided the major crunch point by taking Townline Road to a back entrance. We were through the gates in minutes. Lots of volunteers directed traffic to the parking area.

Once inside we looked around and found one of the two runway seating areas. For an extra $10 each you could get close to front row seats. We opted to pay the extra since we hadn’t brought folding chairs or a blanket. Since it was numbered seating, we found our places, and then headed out to see the static displays.

The Abbotsford International Airshow was designated as Canada’s National Airshow by the late Prime Minister Pierre Trudeau. It always features both civilian and military aerobatics as well as static displays. Whether you like barnstormers in their biplanes, hang gliders, sailplanes, powerful air force jets or aerobatic teams, the Abby Airshow has it all.

The Canadian Forces Snowbirds are always a major attraction and visiting aerobatic teams are often featured as well.

On the ground we got a good look at some of the active and historical planes on display. The Americans had a couple of F-15s on display and you could go up a ramp to check out the cockpit on one of them.

Also on display – a CF-18 Hornet. One decked out in special Canada 150 celebration colours would fly later in the show, but here you could sit in a simulated cockpit if you wanted. There was also a giant troop carrier, a mid-air refueling plane from the American 912th Refueling Squadron, a number of private planes – trainers and stunt planes, and a row of historic planes that included the fearsome looking Douglas A-1 Skyraider aka The Proud American.

The wings were folded up on the display which gave you a good look at the gatling guns and missile launchers. The plane was used by the US Marines, Navy and Air Force as well as the French Air Force and the South Vietnam Air Force from the late 1940s through the 1980s. As a prop plane it was a bit of an anachronism in the age of jets.

The only exhibit we actually entered was the Canadian Forces Sea King helicopter. This aging helicopter has been a political football for years with efforts to replace it with newer equipment being stymied again and again.

This particular Sea King first saw service in 1968 – that’s an old chopper! The crew members told us it is primarily used as a submarine spotter and also does a lot of search and rescue work. As an anti-sub craft, it is equipped with torpedoes.  And we were surprised to learn that the Sea King is capable of carrying nuclear warheads.

A separate photo gallery will have more pics from the static displays.

After seeing the ground exhibits we went back to our seats for the start of the show. The Skyhawks, the Canadian Armed Forces Parachute Team, led off the show with displays of the Canadian and American flags while the anthems were sung. They followed that up with some entertaining stunt parachuting.

Then the headline performers – the Snowbirds. These nine planes are the show closer during the daytime shows. For the evening show they were first up after the Skyhawks. I took a lot of photos and will feature a number of them in a separate photo gallery.

I tried filming the Snowbirds but in movie mode, my camera uses the view screen instead of the viewfinder and it was impossible to get the planes properly centered with the glare reflecting off the screen. But I did film them in 2004 which I’ve linked below.

After the Snowbirds, we were entertained by the Heritage Flight, four fighter planes from four eras strutting their stuff, individually and together. They included the P-51 Mustang which saw duty in WWII and Korea. The F-86 Sabre was the first swept-wing jet fighter and was used in high-speed dogfights in the Korean War. It was use by the Bolivian Air Force until 1994. The F-16 Viper, also known as the Fighting Falcon, has been in production since 1976 and was used in Desert Storm. 25 different countries use the F-16. The F-35A Lightning II is the newest fighter jet, seeing service with the U.S. Marines since July 2015 and combat-ready with the U.S. Air Force since August 2016. It was the fastest jet on display and the roar of its engines as it hits the after-burners is awesome.

The Abbotsford International Airport is a working airport and business must go on, so there were a half dozen or so take-offs and landings during the show by commercial flights.

After a stunt flight by a plane called the Jelly Belly, the U.S. Air Force demonstrated the FA-18 Super Hornet, the newest model of the premier fighter in Canada’s fleet. This was followed by a flight of the CF-18 decked out in a special Canada 150 paint job. It was starting to get dark by then so you couldn’t really see the colours, but I did get the bird on video.

Because it was a night time show, the CF-18 dropped its tailhook on landing. Usually used to snag a catch cable on an aircraft carrier, the hook threw up a stream of sparks as it dragged behind on the pavement behind the plane. Quite a sight.

A couple of more stunt planes entertained before it got completely dark, one of them the renowned Red Bull Air Racer. I managed to get a nice video of this very maneuverable plane.

Now it was starting to get quite dark and the AeroShell Aerobatic Team took to the sky lit up by lights all around each lane. This was the debut performance of the team at the Abbotsford Airshow and they were terrific. Flying in formation has to be tough in full daylight so seeing them perform in the night sky was amazing.

Finally complete darkness gave way to Bob Carlton and his Super Salto Jet Sailplane. A sailplane powered by a jet engine – what a concept. Bob trailed fireworks behind him as well as launching more from the tips of his wings. My camera battery was almost dead but my wife got a video with her iPhone.

This was followed by Dan Buchanan with his hang glider, also streaming fireworks. Quite a sight.

The evening was capped with a full fireworks show. All in all, a rather different take on the airshow than the daytime event. We enjoyed it a lot.

A couple of tips – it cools down considerably in the evening so bring a sweater. We were thankful we did and it was still a bit chilly. And exit where you came in. There was some disorganization when we left as there were no volunteers guiding vehicles and it was a bit of a free-for-all. Quite a traffic jam. We thought the way we came was crawling at a snail’s pace so we followed a bunch of cars going in a different direction – a bottleneck ending in a barrier. Volunteers there finally let us through, but we ended up on some back road. As Abbotsford residents, we figured out where we were, but non-residents could have become hopelessly lost. Leaving the airport was poorly organized. It’s something the airshow should fix for next year.

Speaking of next year, the airshow returns on August 10-12 in 2018. And the U.S. Navy’s Blue Angels will be back for the show next year. Definitely worth seeing.

Here are some additional photo galleries and other links. if you’re on the front page of the blog you can just scroll down, otherwise click on the links.