The City of Fremantle in Western Australia teems with history. Founded by Swan River colonists in 1829, it officially became a city a century later. Indeed, much of the architecture in downtown Fremantle dates from the 19th century. The Esplanade Hotel shown above, for example, was originally used to house convicts while the Fremantle Prison was built. In 1892 it became a hotel. It underwent numerous renovations and expansions over the years including 1985 for the America’s Cup. It now has 300 rooms and is designated as a heritage site.

Fremantle is a quaint little city of just 27,000, but it is a bustling one. Located at the mouth of the Swan River, it serves as the seaport for the metropolis of Perth about 18 kilometers upriver.

Downtown Fremantle is compact with all major venues within walking distance. In the map below, for example, the distance from Fremantle Prison to the WA Maritime Museum is just two kilometers or a 25 minute walk.

In a previous post I related our night time tour of the Fremantle Prison which served as a maximum security penitentiary until 1991. But there is much more than the prison to see here.

On our first visit, we parked near the Fremantle Oval and visited the Fremantle Markets. Founded in 1897, these public markets feature farm fresh produce, a variety of artisans and crafts, restaurants featuring Aussie cuisine, and, of course, buskers. We were much amused by a young woman on stilts in an emu costume that day.

One of the fast food joints called itself the Bush Food Cafe and featured roo dogs, croc dogs and a sample stick containing roo, croc and emu! 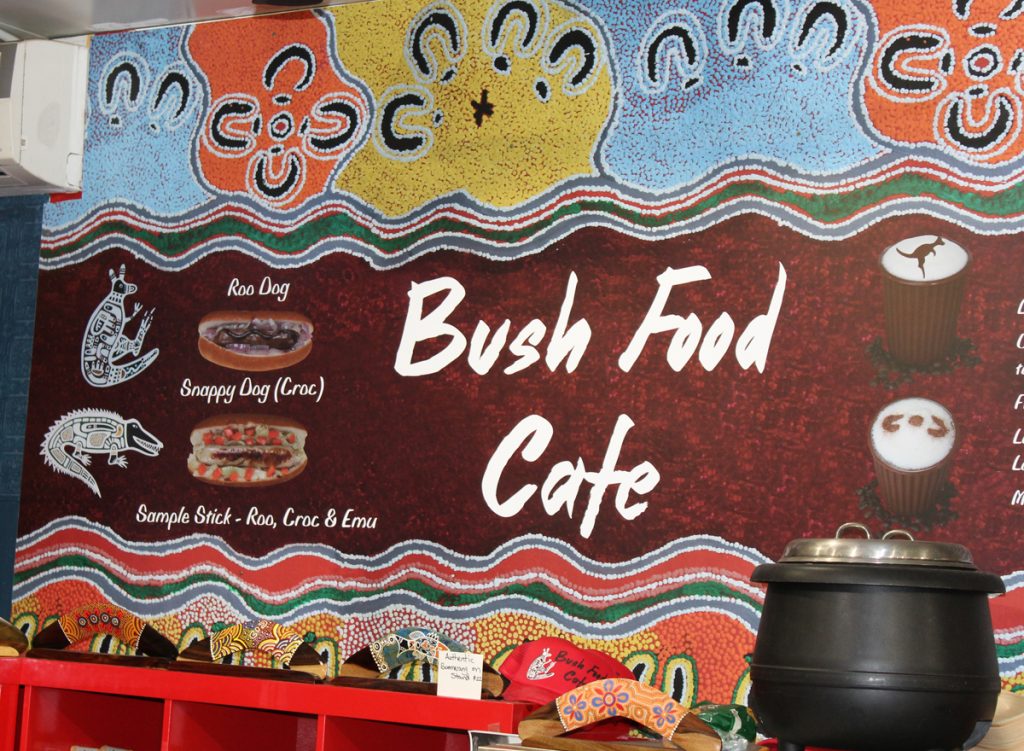 On our first visit we saw  a busker playing a lively rag on the piano and on another visit we saw a seven year old guitar prodigy.

Outside there were a variety of street entertainers and promoters of various causes, including the Falun Gong.

On leaving the markets we walked down a street of wall-to-wall restaurants towards the waterfront. We passed through Esplanade Park across from the hotel on the way. A permanent Ferris wheel is tucked into a corner of the park.

A number of craft breweries lined the shore road (Mews Road) and we ate at one of them that first visit. Passing between a couple of them brings you to the wooden boardwalk that goes around the inner harbor. This is a popular venue for its many fine restaurants. One notable eatery is Kailis Fish Market Café, serving “award-winning fish & chips” since 1928.

We were surprised to find a statue of Bon Scott, the lead singer of AC/DC who passed away in 1980. The base of the statue hails the singer as “the greatest frontman of all time” as noted in the magazine Classic Rock.  Although born in Scotland, Scott moved to Australia with his family at age six and grew up in Fremantle.

On our second visit to Fremantle, Janis and I had taken the train to Perth and then a cruise down the Swan River to Fremantle. Not far from the railroad station is Bathers Beach. Atop a bluff beside the beach you’ll find the Round House.

Built in 1830, the Round House was the first permanent structure in the Swan River Colony. It was built as a small prison with eight cells and a jailer’s residence.

Those of a philosophical bent will be interested to note its design was based on the Panopticon, a blueprint for an ideal prison  designed by British philosopher Jeremy Bentham. The cells are arranged in a semi-circle so one jailer can observe all prisoners at once. Bentham theorized that since the prisoner never knew if he was being watched, he self-regulated his behaviour.

Inside you can see the cells as well as a stocks. A placard indicates the offenses that could land you in the Round House as well as remarking that only one prisoner was ever hanged at the Round House – sadly the condemned was only fifteen at the time.

The detailed information sign for the stocks tells you that the prisoner was held immobile by the hand holds and leg-irons. Sometimes the subject’s ears were nailed to the frame so he could not move to avoid rotten tomatoes and other debris thrown at him by the jeering crowd.

We walked on through the town taking in a variety of city sights. We passed the University of Notre Dame and its beautiful red brick buildings, past shops and iconic hotels like Rosie O’Grady’s which was undergoing some renovations.

We ended up at Fremantle Oval, home of the Fremantle Dockers football (soccer) team.  One of Janis’s friends from work was a huge Dockers fan so we thought we’d get a souvenir for her. When we got there, a few players were on the field being interviewed by a television news reporter.

While Janis was busy buying the souvenir, I popped out and noticed the players coming off the field. I approached them and explained that my wife’s friend was a Dockers fan in Canada and asked if I could get a picture of them with my wife. They kindly agreed. I quickly got Janis and the picture.

Needless to say, her friend loved the picture and had it blown up and posted it on the store’s bulletin board.

Fremantle is an old city which has managed to maintain its colonial charm. No buildings are more than a few stories in height and many sport period architecture, including some with sweeping second floor balconies. There are a lot of restaurants, several craft breweries, a marvelous waterfront, historic prisons and a fair amount of public art. You can easily spend a day or two exploring the old town.

You’ll find a couple of photo galleries linked after this article, but I leave you with one final iconic building – the Norfolk Hotel. The building is pretty non-descript but is notable for the haunting mural on its side – the face of  woman.

Built in 1887 as the Oddfellow Hotel, the building was refurbished and re-opened as the Norfolk 100 years later in preparation for the America’s Cup. It has a long history as one of Fremantle’s favorite watering holes. Indeed, for over fifty years it was owned by the Swan Brewery.

After a succession of owners, the hotel is now owned by a noted hotel company and the lease has been held since 1989 by the partner in another brewery. The mural is actually a bas relief sculpture by Portuguese sculptor Vhils of Australia’s first female senator, Dorothy Tangney.