The life cycle of the Pacific sockeye salmon is a fascinating one. Although salmon are a salt water fish, they start life in fresh water. Every year in October thousands of salmon migrate back to the river of their origin to lay eggs. The eggs are fertilized by the males and stay buried in a gravel nest until they hatch in the spring.  The eggs turn into alevin, a small fish with a yolk sac under its belly to provide nutrition.  They remain buried in the gravel as they grow. When the yolk sac is used up, they emerge from the gravel as fry. 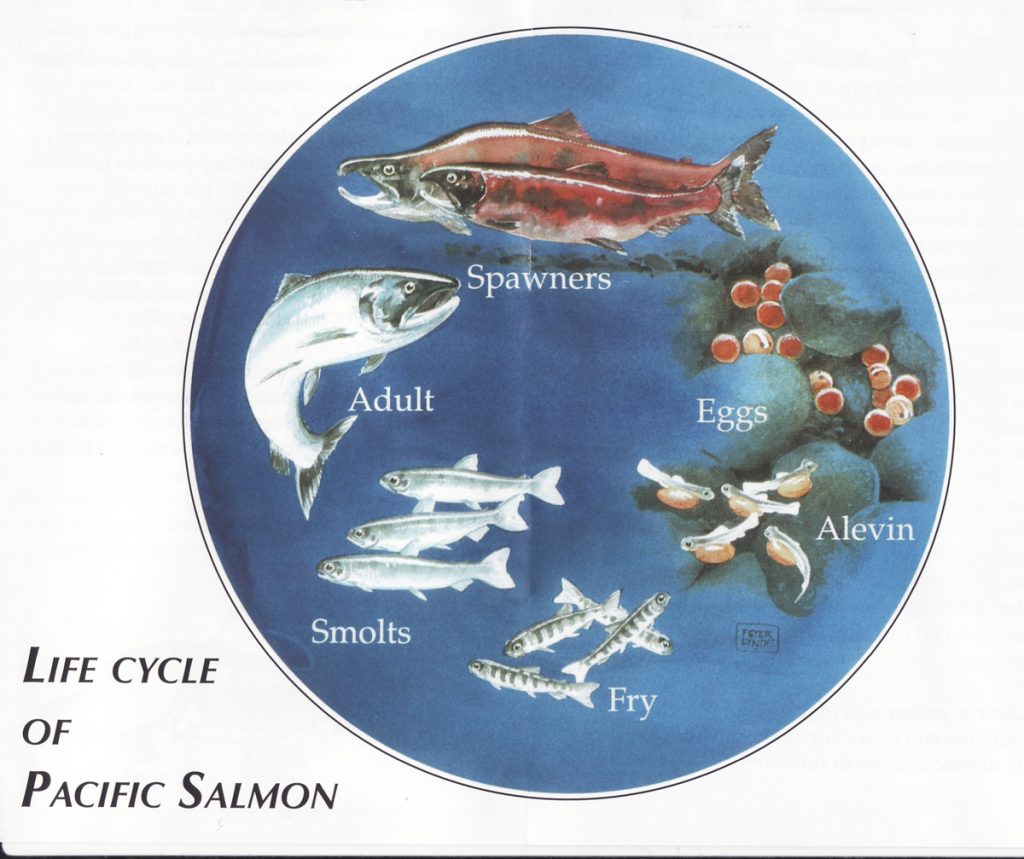 Sockeye differ in their life cycle at this point as the fry swim to a fresh water lake where they stay for a year growing into smolts. These smolts then migrate back to the ocean where they mature into adults. Near the end of their four year cycle they instinctively return to the creek they were hatched as spawners. Both male and female fish return. The female digs a nest about twenty centimetres deep and lays her eggs. The male deposits his milt to fertilize the eggs. After both are spent, they die, the salmon life cycle complete.

Other species of salmon follow a similar pattern but return to the sea as fry, not as smolts.

Salmon fishing is a major industry in British Columbia and, not surprisingly, people have made efforts to conserve and enhance the salmon stock. Weaver Creek, about 45 minutes from Abbotsford and two hours from Vancouver was the site of the first efforts at salmon enhancement in 1885.

In 1965, after several years of a declining salmon run (from an average of 20,000 sockeye salmon to just 12,000), a spawning channel was built about thirteen kilometres from Harrison Mills.  Every year from October 8th to November 1st, the sockeye return to Weaver Creek to spawn. The facility is open to the public daily from October 6th to November 5th from 8 AM to 4 PM.

At the head end is  weir to keep the salmon from heading upstream and diverting them to the spawning channel (on the left in the picture above). 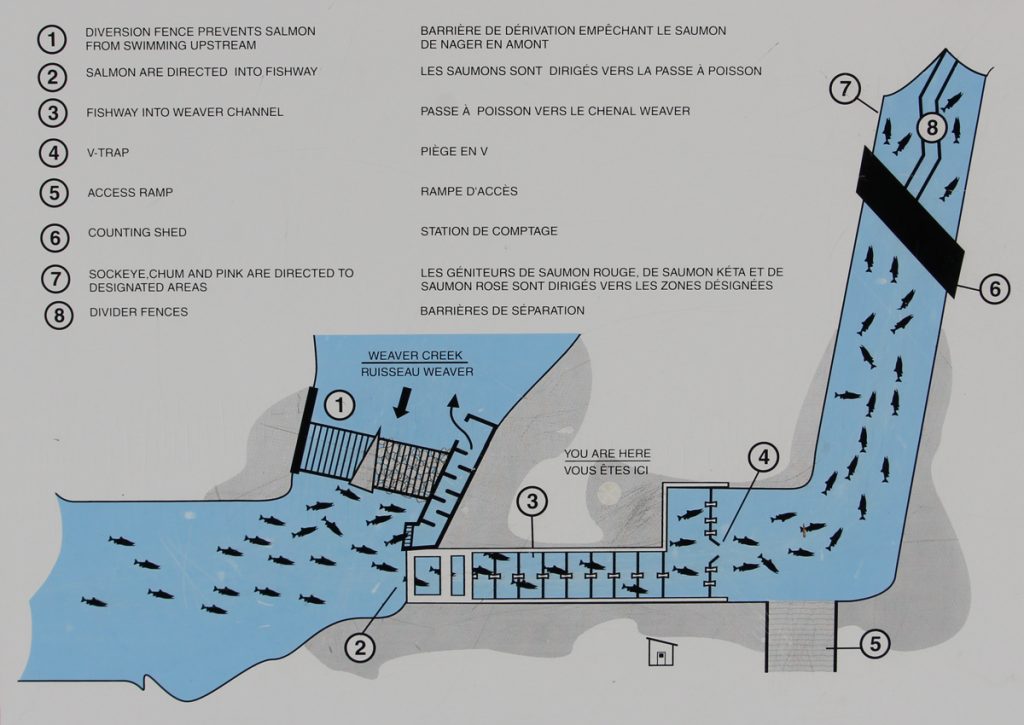 The first part of their journey is a fishway, a series of four cascades which the fish have to navigate to get to the spawning channel.

These are the highest jumps the salmon must breach to head upstream. From there the fish move into a holding area. The picture at the beginning of this article shows a salmon leaping from the lower to the higher level of the holding pond.

Before they can get into the spawning channel itself, they are sorted and counted. Fisheries staff allow 30,000 sockeye, 2000 pink and 2000 chum salmon to enter the channel at a ratio of three females to every two males each fall. Surplus fish are directed back to Weaver Creek to spawn naturally.

Once past the gateway, the salmon enter the spawning channel itself, a winding stream almost four kilometres long. The channel is specially designed with a gravel bed where spawning occurs. The female fish digs tail down into the gravel create a hole about twenty centimetres deep. She lays her eggs and a male comes along and sprays his milt over the eggs. Then they are covered up and the fish continue along the channel.

A female salmon may build several nests before her supply of eggs are used up. Shortly after the salmon, both male and female, are spent, they die. In the wild, the carcasses wash downstream but in the channel, they are collected daily and buried elsewhere on site.

The fish go through a sort of dance or ritual in this whole process. You will see them milling about, sometimes one female chasing another away from a chosen nesting place. A male and female will pair up as a female will not deposit her eggs unless a male is nearby. The male are the larger of the salmon though they look quite similar.

The most fun to watch, of course, is salmon leaping over the waterfalls along the way.  The earlier cascades in the stream are higher and take more effort to navigate. The ones in the actual channel are aluminum and are designed to aerate and oxygenate the water. Oxygen-enriched water helps the salmon.  These aluminum barriers have a notch or hole in the middle and the salmon swim up through these notches though occasionally one will just jump over the barrier.

Below is a video I shot that shows first the fishway, second the holding area before the counting station, third fish milling about the stream, and lastly, fish swimming through the notch in an aluminum barrier.

The Weaver Creek Spawning Channel is open daily from 8 AM to 4 PM until November 5th. It is an almost park-like setting with walking paths and trees lining the banks. There is ample parking across the street from the hatchery. My wife and I enjoyed our visit a lot and highly recommend it.

There were two busloads of Asian tourists visiting while we were there, as well as couples with kids in tow. This is an excellent educational experience for school age children.

The peak of the salmon run is from October 15 to 25 so now is an opportune time to visit.

I should note that downstream is the Sandpiper Golf Course which has an excellent restaurant called the Clubhouse. We dropped by for dinner after our visit to Weaver Creek. If you’re a golfer you could make a day of it, doing some golfing a well as visiting the fishery.  And Harrison Hot Springs is not far away as well.

And I should also note that, while the Weaver Creek spawners are collected and buried after they die, the many other salmon traveling up other creeks and rivers float back down the river naturally after they pass away. These fish are a favorite food source for bald eagles and the Sandpiper Golf Course is also the site of the annual Bald Eagle Festival.  There you’ll see the “world’s largest concentrated gathering of bald eagles” in November.  I’m told November 5th is the best date for eagle watching.

Since the salmon enhancement centre is open until November 5th, you might want to combine both if you visit in early November. There were no eagles to be seen when we went on Oct. 10th – too early in the season. And there may be fewer fish still making the run by November, so it’s a trade-off.  We will be going back for the eagle festival.

Below are some links of interest followed by some more photos.