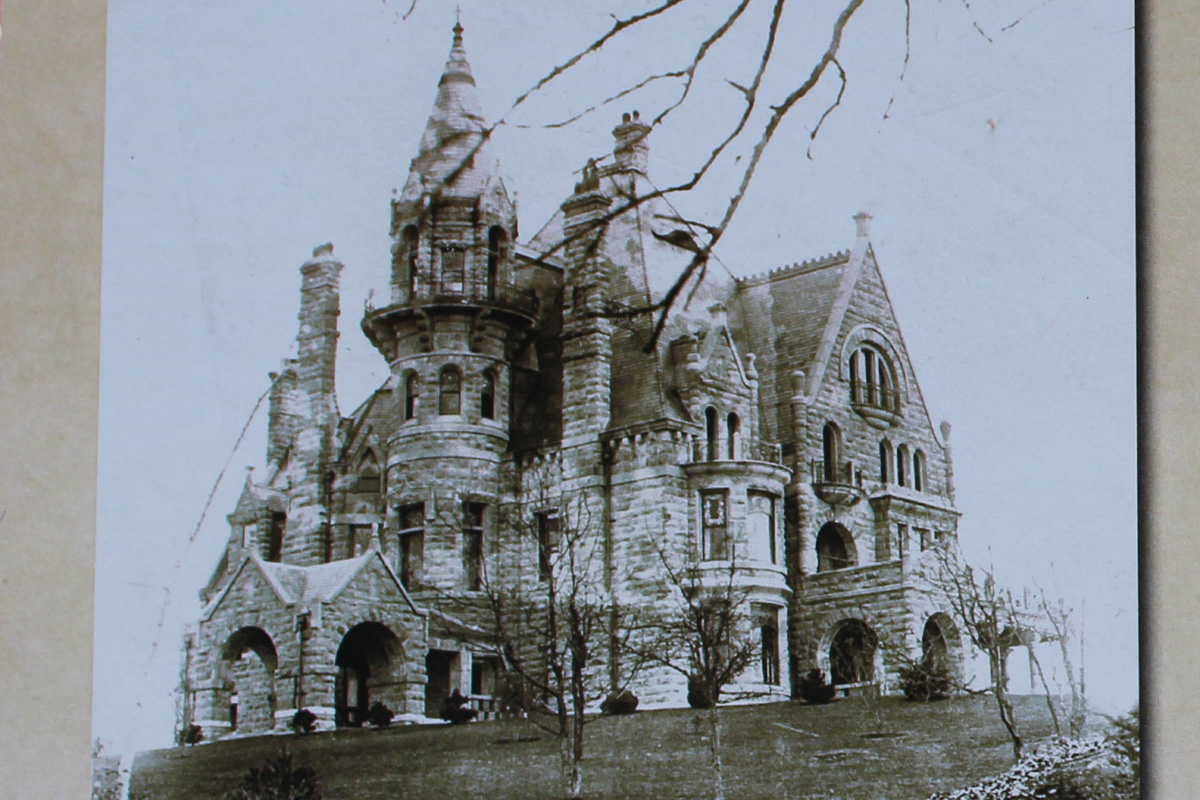 They say a man’s home is his castle but it is rare that a home really is a castle. We generally think of European royalty, but there is a distinctive group of wealthy industrialists who built homes that resembled castles. The Hearst Castle in San Simeon, California is one notable example. Another is the Boldt Castle in the Thousand Islands.

One of these “bonanza castles” as they were called, sits on a rocky hill in the heart of Victoria, British Columbia. Built between 1887 and 1890 for coal baron Robert Dunsmuir, Craigdarroch Castle is marvelous display of 19th century opulence. The name “Craigdarroch” is Scots Gaelic and means “rocky oak place.” The original estate encompassed 28 acres.

Dunsmuir was a Scottish immigrant who arrived in Canada in 1851 with a wife and three children as an indentured $5 a week miner for the Hudson Bay Company’s coal operations, first in Fort Rupert (now Port Hardy) and later in Nanaimo, B.C. 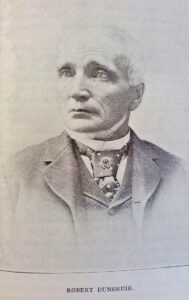 The Bay’s crown lease which gave it rights to all the coal on Vancouver Island ran out in 1859 and Dunsmuir, now a seasoned coal operator, discovered a new seam one day while fishing northwest of Nanaimo. He staked a claim to 1600 acres and with some partners started a successful coal mining operation. He later bought out his partners, was a founding partner in the Esquimalt and Nanaimo Railway and became the “richest and most important man in Western Canada.”

Sadly, Dunsmuir died in 1889, a year before the castle was completed. His widow Joan and their three unmarried daughters and two orphaned grandchildren, however, did live in the castle until Joan’s death in 1908.

After her passing, none of the children wanted the estate so it was subdivided and sold. Over the years the castle has been used as Craigdarroch Military Hospital, Victoria College, offices for the Victoria School Board, the Victoria Conservatory of Music, and today it is the Craigdarroch Castle Historic House Museum.

It is operated by a non-profit society and its conservation is funded almost entirely from the revenues generated by its 100,000 annual visitors.

A visit to Craigdarroch is like stepping back in time into a fascinating piece of Canadiana. A tour will take you through the porte-cochere to the main hall and stairwell with its rich oak paneling.

The castle is filled with Victorian era furnishings including some that belonged to the Dunsmuir family. Restoration is an on-going project. On the main floor you’ll find the library, the dining room and a drawing room.

The drawing room includes an 1898 Steinway piano which came from the home of Dunsmuir’s oldest son James who served as Premier of British Columbia from 1900 to 1902 and as Lieutenant-Governor from 1906 to 1909. The room, like many in the castle has some magnificent stained glass windows. The castle has “one of the finest collections of Victorian residential stained and leaded glass windows.”

The tour of Craigdarroch Castle takes you through one half of the building going up and the other half coming back down. After the dining room, stairs take you to the second floor where you’ll see Joan Dunsmuir’s sitting room and several bedrooms.

Up another flight of stairs takes you to the third floor and the Billiards Room. There are two more bedrooms on this level as well. Many of the displays in the house have signs explaining the rooms. The Billiards Room was specifically built for the entertainment of the Dunsmuir daughters. 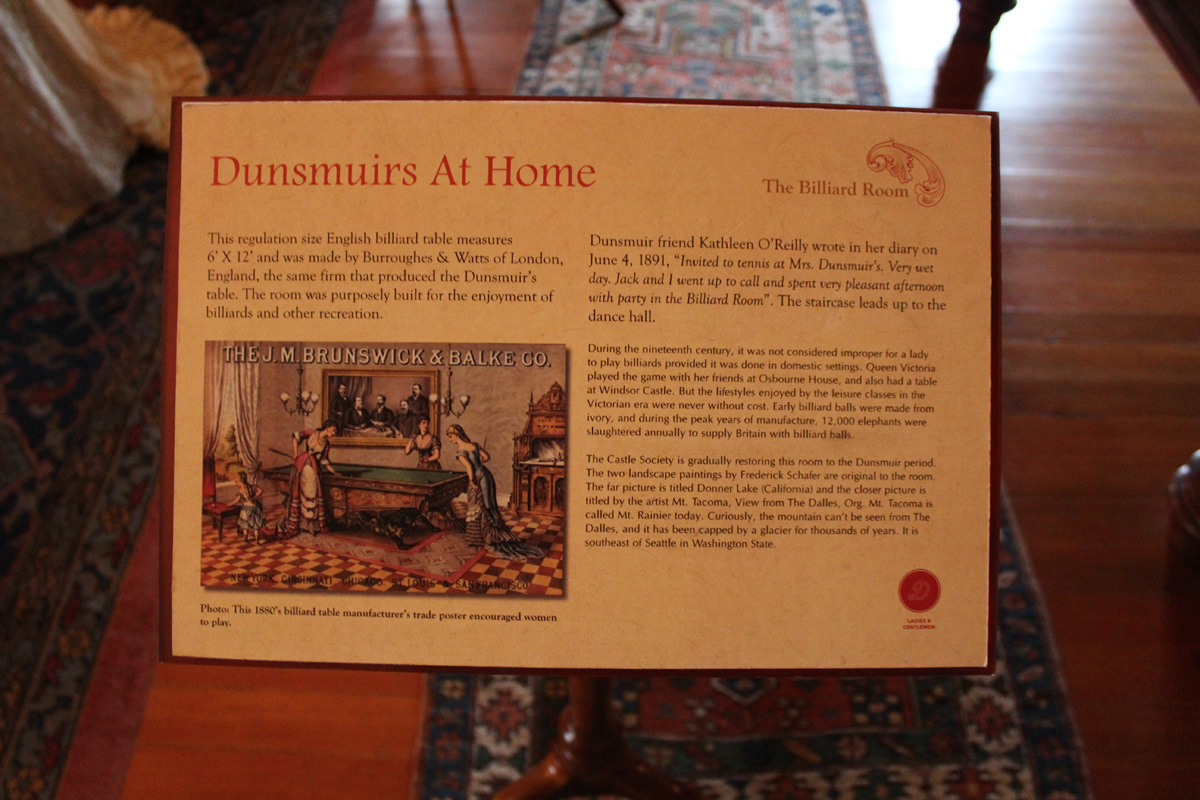 Besides Joan and her three unmarried daughters, Craigdarroch Castle was also home to two of her grandchildren who had been orphaned. One of them, twelve year old Robert Dunsmuir Harvey, was the youngest resident at Craigdarroch. He was a keen sportsman and equestrian and won numerous trophies which are shown on the fireplace mantle in his

One more flight of stairs takes you to the top floor and a dance hall. Pretty fancy digs with both a Billiards Room and a Dance Hall! During the Victoria College years, the dance hall was a classroom.

From the fourth floor you can go out on a landing at the tower and get a great view of the surrounding area. When it was completed in 1890, it was the highest point a person could stand in the city of Victoria. On the day we were there, it was a bit overcast. 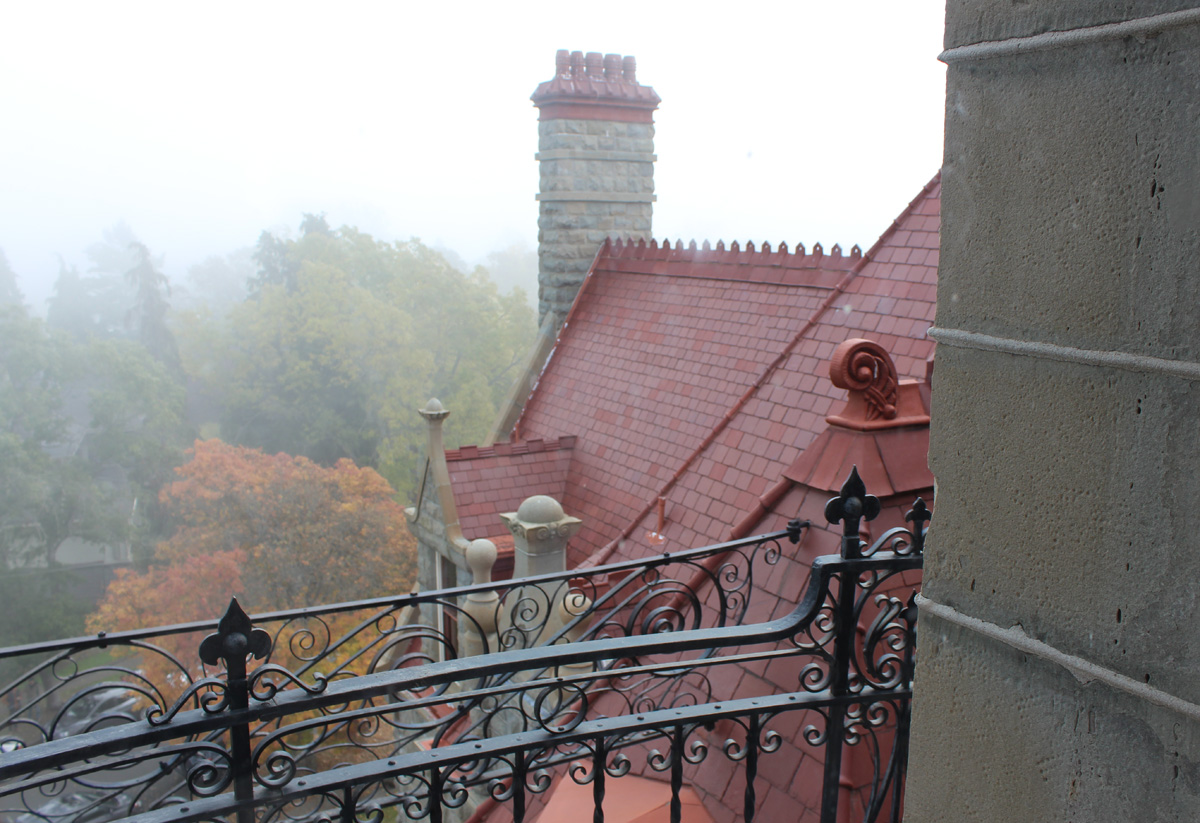 Descending back down we pass more bedrooms and a bathroom. The flush tank in those days was high up on the wall and the toilet seat was solid wood with a wooden lid.

The household had several live-in servants. The coachman and his family lived in a separate lodge on the property and the stableman lived in the stables. But domestic servants had their own rooms in the castle.

Although young Robert Harvey was the only male living in the house, there were male visitors including Joan’s sons. For the benefit of these visitors, the house had a smoking room. The room has an interesting stained glass window of a Dutch pioneer smoking a pipe. We leave Craigdarroch with a visit to the Breakfast Room, almost as large as the Dining Room. The house had a very large kitchen to handle all the meals and refreshments for entertainment.

Be sure to check out the additional Photo Gallery as well as the links below.