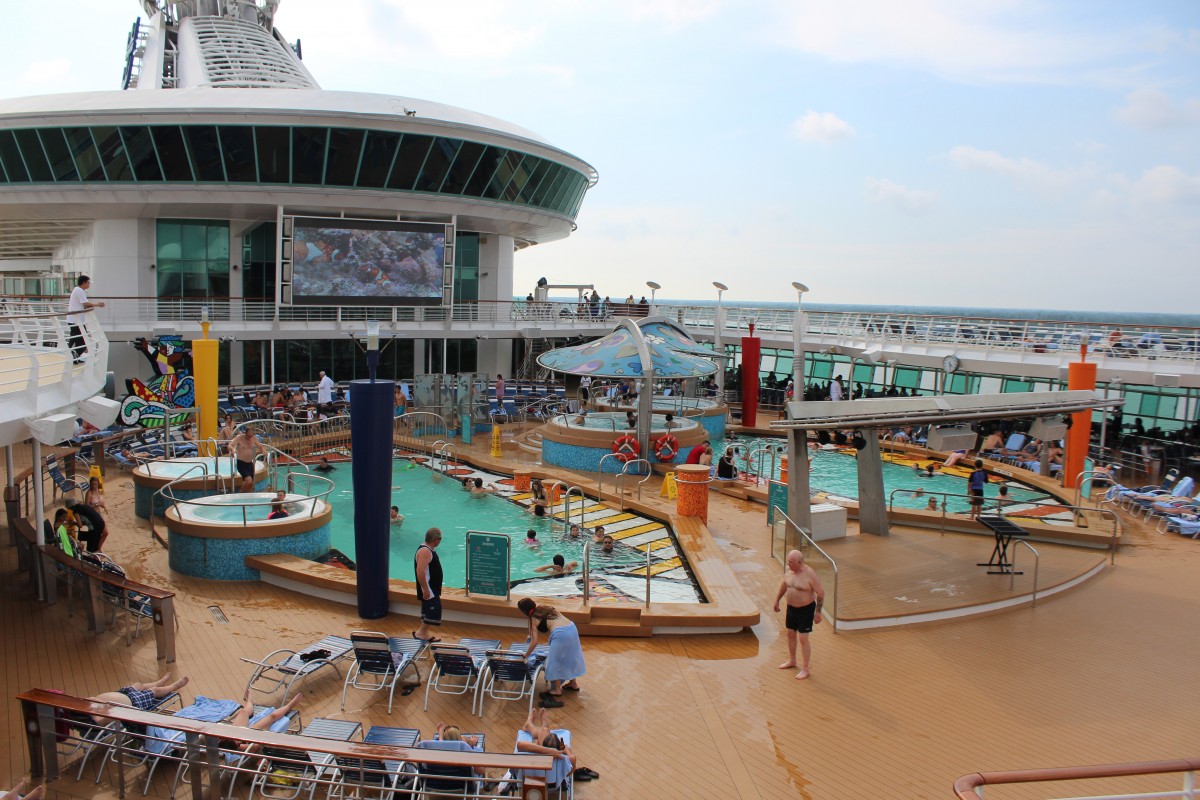 On January 22, 2016, my wife and I went on our sixth cruise – a cruise promoted as a taste of Southeast Asia. We had never been in Southeast Asia before, except for a brief stopover at the Kuala Lumpur airport on our way to Perth, Australia. But it has always been a popular destination for Canadians with many visiting Thailand, Viet Nam, Singapore and Malaysia among others. So it was another part of the world that needed exploring.

I’ve already posted about all our ports of call as well as about our stay in Singapore. So this post is about the cruise itself. Cruises are a destination in themselves, even if you never get off the ship. In 2009 we took a fourteen day trans-Atlantic cruise and were at sea for seven straight days, as long as this entire cruise. There is always something to do and to keep you entertained.

This cruise was with Royal Caribbean aboard the Mariner of the Seas, a huge ship, one of five Voyager class ships. We have cruised on its sister ship, the Navigator of the Seas twice before. But each has its own distinctive style with unique art work for each.

We had pre-boarded online so everything went smoothly when we arrived to board. Right away we went for a meal and everything was decked out to welcome people, and to hail the upcoming Chinese New Year.

The time between boarding and setting sail is a great time to explore the ship and find out where everything is. It’s also a great time to check out the many facilities which are all open for inspection. We checked out the health and beauty salons where you can get your hair done or have a massage or work out in the extensive gym. We entered a draw to win a spa treatment. At the draw my wife won a $100 coupon towards a treatment and she used it later to get a stone massage.

We also confirmed our dinner reservations and at 5:30 went for dinner where we met our dining companions for the trip, a couple from Melbourne and their 13 year old son. We also met our wait staff.

Our dinner companions, Ned, Annie and Josh, were always fun to talk to and we spent an evening together at the karaoke bar as well.

As with all cruises, there is entertainment every night in the theatre. The MC is usually the Cruise Director for the trip. Ours was a fellow from mainland China who went by the name of Fang. He started by introducing some interesting facts and figures about the makeup of guests and crew. There were guests from 53 different countries and crew from 43.

He started by saying, “There is one guest from each of the following countries…” and listed them by name – around twenty or so. Then he went on to list the countries which had two guests aboard. And then three and so on. The top five were Singapore and the United States with about 200 guests from each, Great Britain with around 500, China with about 500 and Australia with over a thousand people. Total was around 3300.

The number of guests and crew from mainland China is a good indication of how much China has changed since the rigid days of Maoism. Nobody could leave the country then. It was a veritable prison. And those caught flirting with capitalism could be shot. But here were 500 guests from China enjoying the good life.

The entertainment on this trip was below par compared to the other Royal Caribbean cruises we have been on. One of the downsides was the the usual complement of staff singers and dancers boarded the same time as us and so did not make an appearance until the last day after they had done extensive rehearsing. But the nightly talent was lack lustre as well. We enjoyed some of it, but it lacked flare.

The first night featured an Australian male trio called La Forza. They were pretty good – sort of like the Three Tenors but they did more pop than classical music. The second night featured violinist Venus Tsai who was a finalist in China’s Got Talent. We weren’t particularly interested but popped in at the back of the audience for a few minutes part way through to check her out. She was very talented, but the audio mix was terrible. She was drowned out by the ship’s orchestra. But people who went enjoyed her very much.

The third night had Australian comedy magician Duck Cameron. I’m a huge fan of magic and looked forward to the show, but we were both disappointed. The magic was ordinary, nothing we hadn’t seen before. And the comedy was lame. The fourth night featured Australian singer Tamara Guo. She had a good voice but her presentation was horrible. She said she was suffering from a sore throat and was constantly apologizing for it. And she spent more than half of the act telling her life story instead of singing. People were walking out of the show in droves.

I didn’t save the calendars for days 5 and 6, but I believe there was no show on the fifth because we were in Phuket for two days so people could seek entertainment ashore if they wanted. Day six was an Australian comedian who was so-so. And day seven featured a production extravaganza with the ship’s singers and dancer called Center Stage. The Royal Caribbean cruises always have a very talented cast of singers and dancers and this show was no exception. An enjoyable evening.

But I must put in a word for the very best show on the ship. The Mariner of the Seas, like her sister ships, has an ice rink. Guests could skate during designated hours, but there was also an ice show. There were several showings and we went on the afternoon of the last day. And it was fabulous. The show, called Big Top on Ice, had a circus theme. Brilliantly coloured costumes and fabulous skating.

It so happened that Australia Day happened during the cruise and with such a large contingent of Aussies aboard, the ship celebrated as well.

On the last day we also took advantage of an opportunity to tour the ship’s galley for a nominal charge. This tour included a complementary Royal Caribbean Recipe Book and a champagne lunch. The book alone was worth the money.  And the behind-the-scenes look at the galley was very interesting. They churn out a lot of meals with three decks of fine dining restaurant as well as an almost constantly open serve yourself buffet style restaurant, the Windjammer.

Of course, there were a lot of amenities we did not take advantage of – basketball courts, miniature golf, rock climbing and so on. But we did use the swimming pools a lot.

One of the great pleasure of each Royal Caribbean cruise is the singing waiters and chefs. Once and sometimes twice on a cruise, the wait staff will march around the room waving white towels as they congregate on the staircase. Then the head of the dining department gives a little speech praising their work and they then sing for their guests. We had our wait staff entertain us twice this cruise and it was great fun.

I’ve written about our ports of call already but here are links to my blog posts on each in case you missed them. Note that some have links at the end of the articles to additional photo galleries.

All in all, this was a interesting and exciting cruise. Not the best cruise we have been on, but memorable all the same.