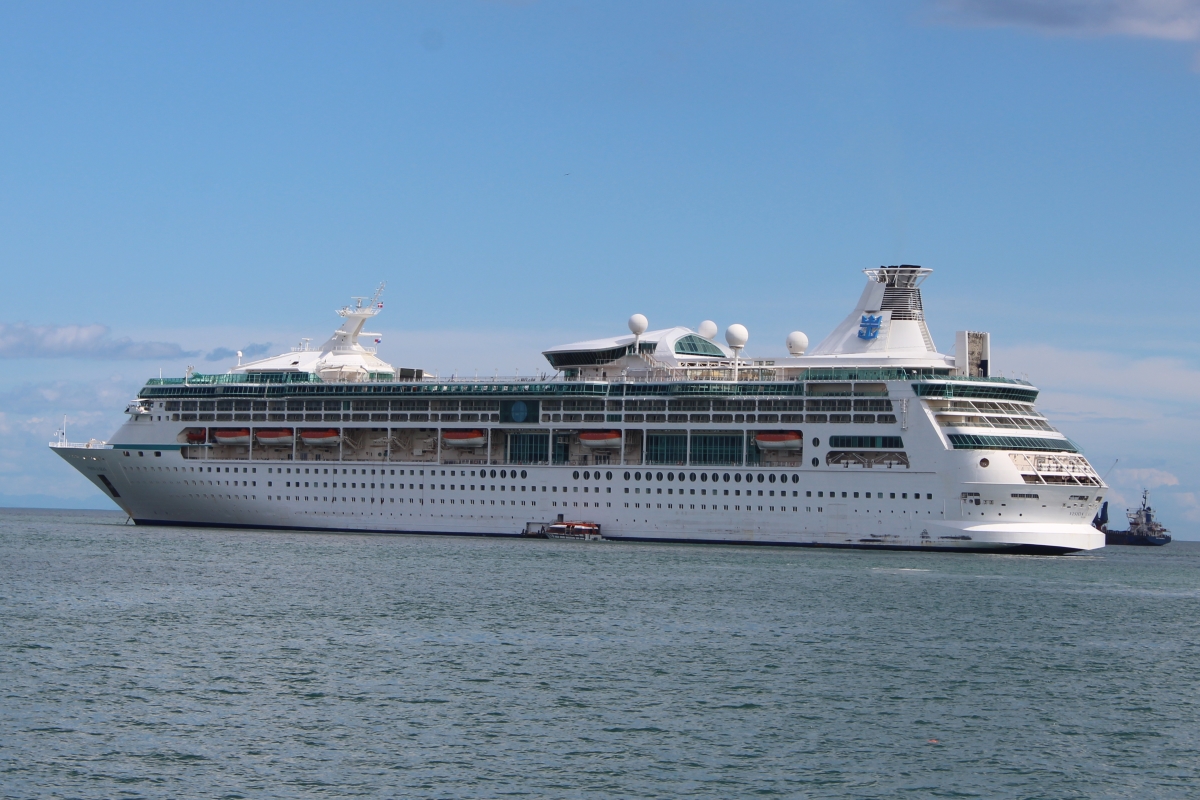 One of the things on our bucket list was to take a cruise through the Panama Canal.  On Nov. 15 we did just that. It was a sixteen day cruise that left from Fort Lauderdale, traversed the Panama Canal, and ended up in Los Angeles. There were six ports-of-call along the way.

Our ship was Royal Caribbean’s Vision of the Seas. She was specifically built to do the Panama Canal circuit and barely fits in the locks of the canal. This was our second time on the Vision as we had taken the same ship on a Mexican Riviera cruise in 2006.

We left Fort Lauderdale a bit late.  Every cruise starts with a bon voyage party on the pool deck but it was raining when we left so the party was moved to the Centrum, the big open entertainment space that vaults from the fourth to the eleventh floor.

Today’s post will give an overview of the cruise with separate posts about each port of call to follow. This was our seventh cruise and our longest to date. After two nights and a full day of sailing, we arrived at our first planned port-of-call, Georgetown on the Grand Cayman Island. This was a tendering port, which means the ship does not actually dock. It lies at anchor nearby and passengers are ferried back and forth to the mainland on small craft called tenders.

Unfortunately, the seas were a bit rough and for safety reasons, the tenders could not run. The captain made an announcement and we sailed on by.

The islands were named Las Tortugas by Christopher Columbus because of the abundance of turtles there. These creatures were hunted to near-extinction and the islands renamed the Caymans after the caiman, a smallish member of the alligator family. Turtles have made a significant comeback and our planned excursion was to a conservation centre, home to 11,000 green sea turtles . Part of the adventure included an opportunity to swim with yearling sea turtles. We were sorry to have missed it.

In any event, we sailed on for another day and half and arrived at the next port-of-call, Cartagena, Colombia on November 19. There we visited an historic Spanish fortress and other venues around the city. I’ll cover those in a later post but leave you with this picture of the fort.

With six ports-of-call and a full day traversing the Panama Canal, that meant ten full days at sea. What does one do on a sea day? Well, all modern cruise ships are outfitted with a wide variety of facilities including a full-size theater. Each travels with a contingent of in-house singers and dancers as well as a small orchestra. These are invariably first class.

Every evening there is a theater show, even while in port as the ship usually leaves before showtime and sails overnight. And there is a full entertainment staff that organizes various events around the ship during the day. There are several bands to entertain and perform at dance parties. One of the bands on our trip was called The Celebration Band and they performed regularly on the pool deck as well as in the Centrum.

The theater shows usually feature first-rate entertainment and there were magicians, comedians, and singers on hand. The Vision of the Seas singers and dancers put on a couple of Broadway style extravaganzas. Our favorite entertainers included the magician Bill Cook, the comedians Wilde & James, Landry, and the Queen of Southern Sass, Etta May. The comedians usually performed a late night adult show as well.

Of the singers brought on to perform shows, our favorite was Australian sax player and singer Hayden Smith and his wife Alexa Jayne. They did two shows at the theater and then performed at a dance party in the Centrum. A terrific show.

Besides the entertainment, the Cruise Director’s staff organized a wide variety of events like trivia quizzes, contests, and educational things like learning origami or how to play better bridge.

From Cartagena we sailed overnight to the Panama Canal. Wow! What an adventure. The Panama Canal is one of the greatest engineering feats in history and traveling through this historic landmark was a thrill. I’ll be doing a separate blog post on the crossing as there is so much history and background to relate. For now, I’ll leave you with two pictures of the crossing.


Another activity which has been a feature of every cruise we’ve taken is an art auction. Park West Galleries conducts such auctions on most major cruise lines. And on this occasion, we bought a painting, the third time we have bought art on a cruise ship.

The painting we bought is called Euterpe-Jupiter, part of a series featuring Greek Muses. It is digitally produced on aluminum through dye sublimation and is hand signed and numbered by the artist. The print edition is 130. The picture arrived by Fedex yesterday fully framed.

I’d be remiss if I didn’t mention the fine dining that you get on a cruise ship. All Royal Caribbean ships have large formal dining rooms as well as a large cafeteria style restaurant called the Windjammer. Cruising is like going to an all-inclusive resort as all meals and food is included in the price of the cruise. Alcohol and soft drinks, however, cost extra. There are also several upscale restaurants which you have to pay for. You can opt for a scheduled time for dining or pick open dining. We opted for eight o’clock meals. Our waiter, assistant waiter and head waiter were top notch.

One of the fun things on Royal Caribbean cruises is that a couple of times the entire wait staff or kitchen staff will march around the dining room and congregate on the staircase to sing or dance for us. The head chef gave a short speech in which he talked about the spirit of good will and friendship that characterizes a cruise ship. People from 67 countries were on staff on our ship, a veritable united nations.

Before closing, I’ll just give you a quick rundown of our other ports-of-call. I’ll be doing a separate post on each. I’ll include one pic from each below.

Every stop has a variety of excursions to choose from. You can also get off the ship and make your own arrangements, which sometimes is the better option. We took a tour at each stop.

The first was stop was Cartagena, already mentioned. The second was Panama where we took an excursion called Monkey Watch where you get to see monkeys in the wild.

Our third stop was Costa Rica where we took another boat ride to see crocodiles and lots of tropical birds on the Tarcoles River.

Our fourth top was Puerto Quetzal in Guatemala. We opted to take a tour of the ancient city of Antigua. Founded in 1543, it served as the first capital of Guatemala.  Earthquakes and volcanic eruptions forced the capital to be relocated in 1776. Antigua has been rebuilt over time and is now a popular tourist attraction with its historic architecture and seventeenth century feel.

Our fifth stop was not originally on the itinerary. But because the Cayman stop had to be scrapped, our Captain worked behind the scenes to add Huatulco, Mexico to the trip. We took advantage of the opportunity to visit a private beach up the coast where we lounged in the sun and swam in the bay.

Our final port-of-call was Puerto Vallarta. This was our third visit to this lovely place but I’ve never gotten around to posting a blog about it. I’ll borrow from all our visits when I do. On this occasion we took a sailing yacht along the coast to Los Arcos, a couple of mammoth rocky outcrops frequented by hundreds of pelicans.

As the end of our cruise approached, there was a big farewell show at the theater and in the Centrum a grand ceremony called the International Parade of Nations. Representatives of all the 67 nations employed on the ship gathered waving their flags. Some gave a short performance. It was a colorful and exciting affair and a fitting close to a fabulous cruise. The fellowship and good will that abounds on these cruises is inspirational. Maybe the true road to world peace is to have all the world’s leaders take a cruise together to see how people can live in fellowship and harmony.

Follow the link below for an additional photo gallery.